I am a newbie with this and I bought a Inovelli LZW 31SN switch and five Ilumin bulbs. I want to use the multi tap feature so I can turn three lights on with a single tap and two lights on with a double tap but I can’t find on this software how to set up the double tap like seen on the YouTube video from DYII smart guy Where it shows a different interface than what I got when I paired my new switch to the Hubitat. He also talks about using a child driver which does not appear to be required with the new driver for the switch.Any help will be appreciated. Thank you

@ggllchee - As soon as I get home I’ll send some extra help if no one else does. Basically you’ll need to setup Rule Machine for buttons to control.

See if this gets you going until @harjms gets home. He’s a HE guy.

@ggllchee - So I use rule machine over ABC. I like to have more defined options and sometimes RM is the only option. Here is a simple rule I have that turns on my shower light and bath fans by pressing up twice. You should be able to replicate it with your switch. Are you using smart lights? You can’t control “dumb” lights unless the other lights are on a smart switch (like another dimmer). I’d also recommend Inovelli’s driver over Hubitat.

Below are my screenshots: 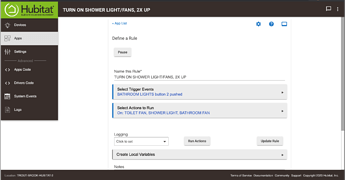 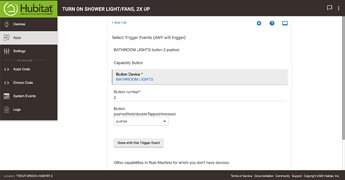 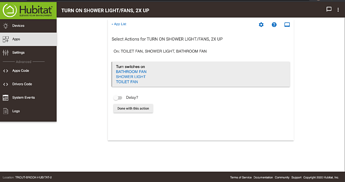 thanks ,will try this to see if work. All 5 lights are Ilumin and on the same LZw31-SN switch, I group 2 and named Porch and grouped the other 3 and named Driveway and would like to control the groups independently by using the multitap feature. example pressing up and down button once turns on and off driveway group and tapping twice up and down turns porch on and off.

thanks will look at this

Since the bulbs are presumably attached to the switch’s load, you want to make sure you never cut power to any of them. So after making sure the power is on and set to maximum, in the driver preferences for the switch, make sure you have “Disable Local Control” and “Smart Bulb Mode” both enabled. For smart bulbs, I also set the turn-on preferences to guarantee constant power. This means setting all of “Default Level (Local)”, “Default Level (Z-Wave)”, and “State After Power Restored” to 99.

For simple stuff, I just use button controllers. You could do this with Rule Machine as well but I find this quicker because of the prebuilt modular options. Here’s a pair of LZW31-SN that turn on the light at the bottom of the stairs with a click, or the entire basement with a doubleclick. 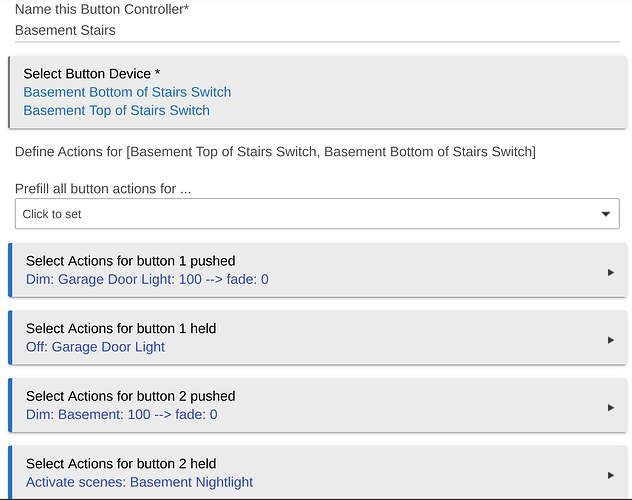 I am trying to set up with button controller and got the push button 1 set but when I go to set up button 1 held I do not see option to set off it gives me again set dimmer and have to put the range for dimming instead telling it to set to off. Did I miss something? Thanks

Can you post a screen shot of what you’ve setup? 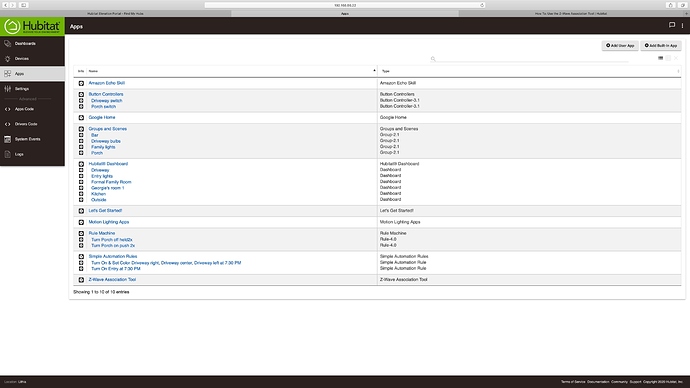 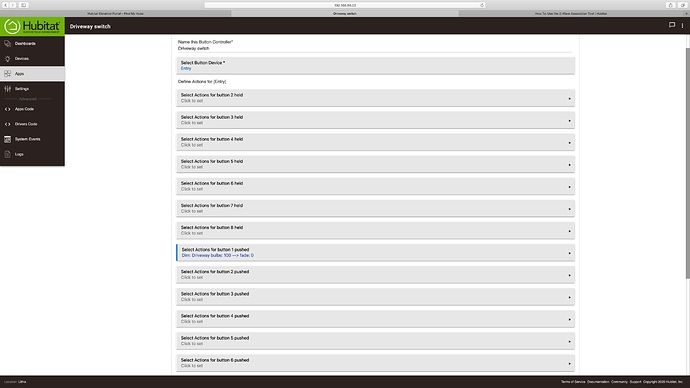 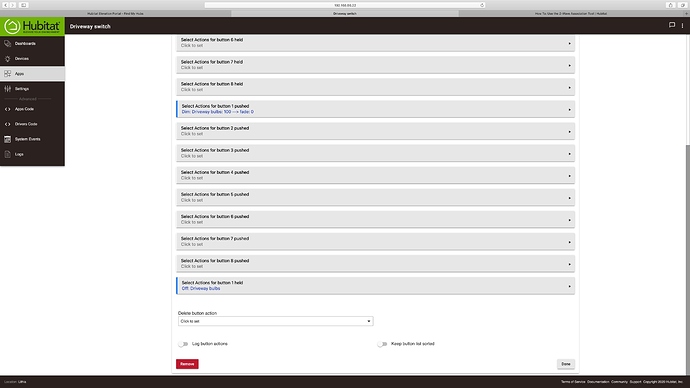 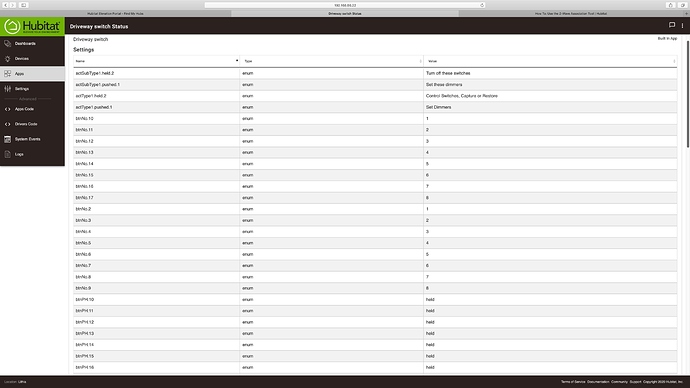 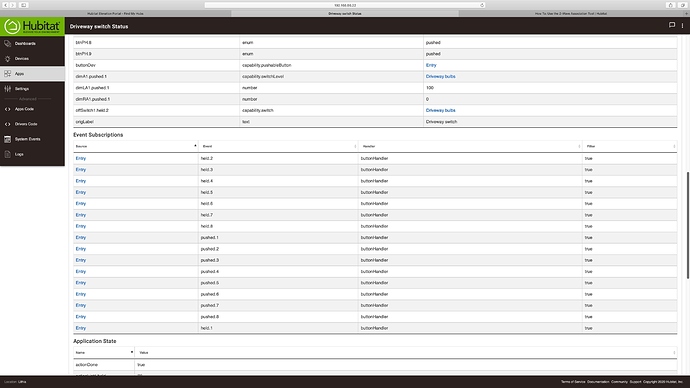 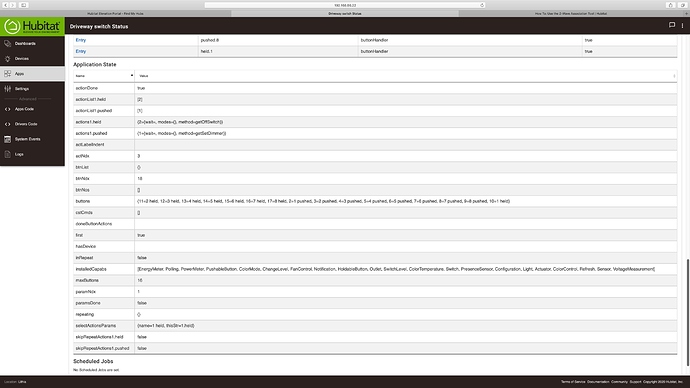 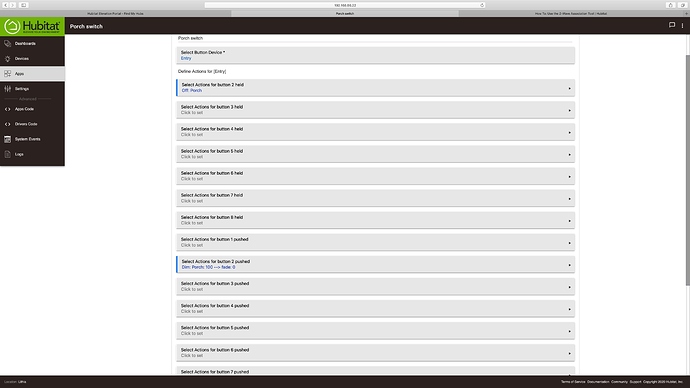 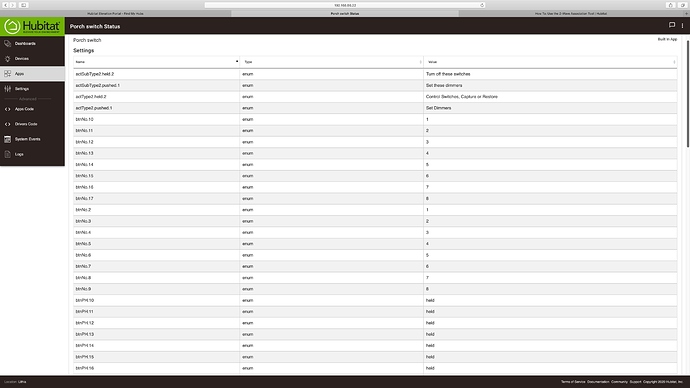 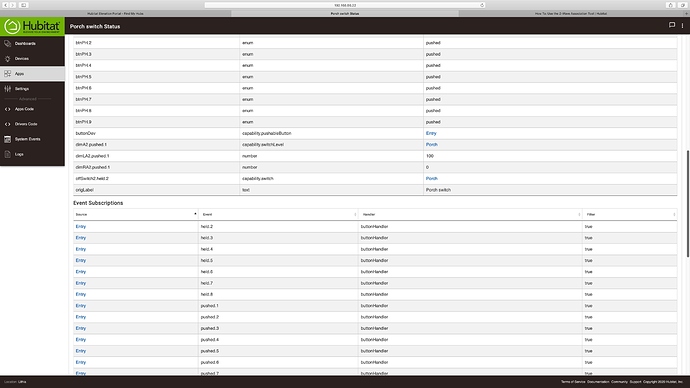 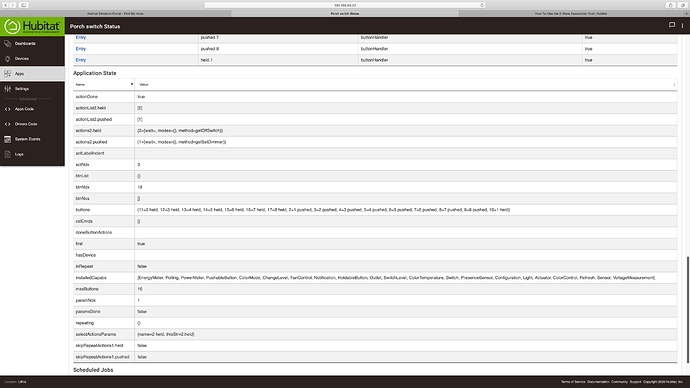 It appears that you’re controlling groups instead if directly controlling the devices. Have you tried just controlling a single device directly? (not that this shouldn’t work … just a suggestion to remove variables)

It also appears you previously installed the association tool, have you associated any of these devices together before attempting this?

It is one red series dimmer switch controlling 5 inovelli bulbs on same circuit in single pole set up, which I grouped in driveway(3 bulbs) and porch( bulbs). I had associate the switch to the driveway bulbs but I just delete the association to see if it made difference but it did not, thanks.

I tried setting push button2 to just control one Porch light but it does the same thing wether I tap one or any number of taps in the upper part of switch it keeps turning on the driveway lights. Now all light respond normally by the hubitat, I can turn on individually or in groups, same with voice commands 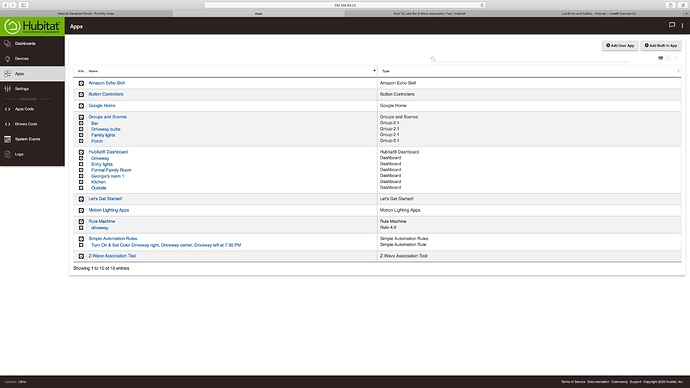 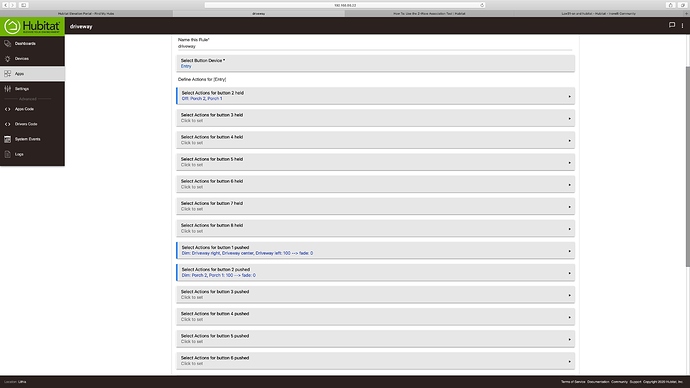 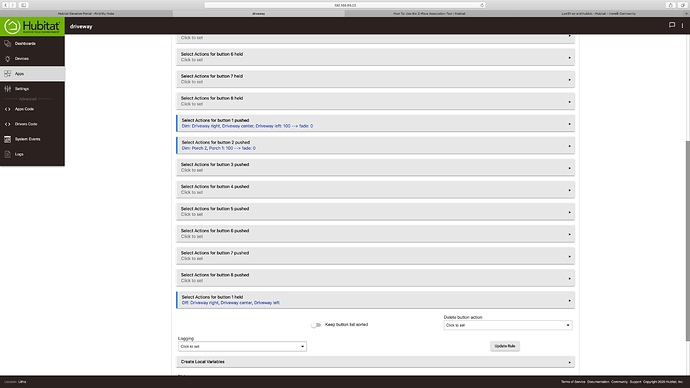 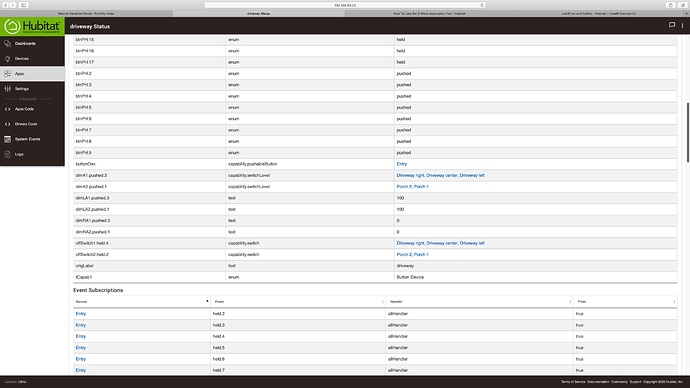 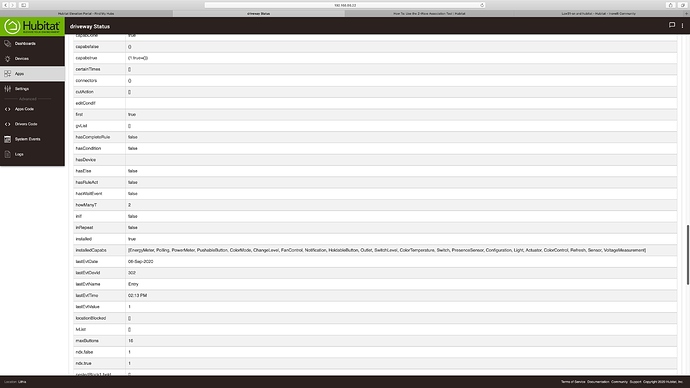 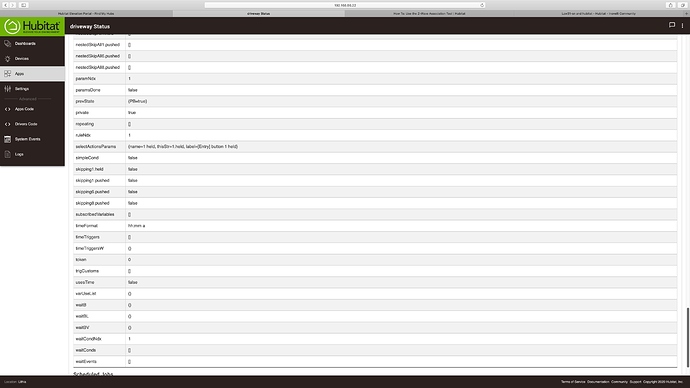 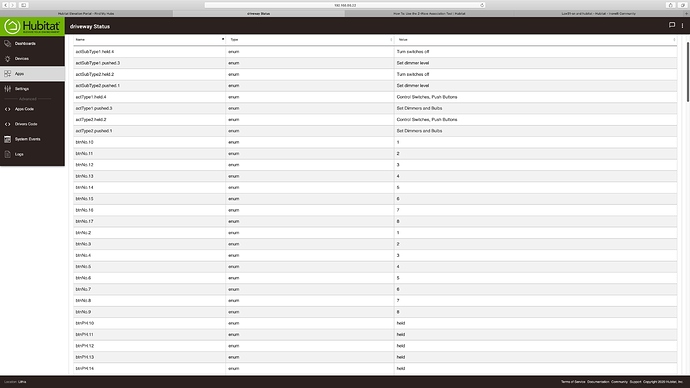 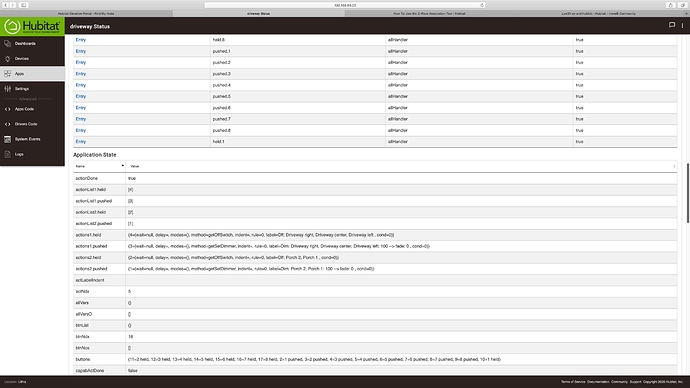 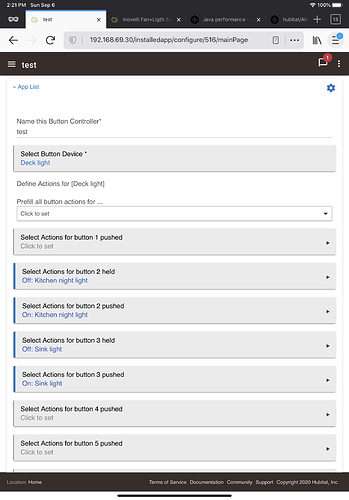 In my example, all three devices are on separate circuits, but it should work the same, as long as local control and other features in the switch have been overridden to make sure that that your smart bulbs don’t get physically powered off.

Perhaps the multiple instances of the button controller On the same switch are resulting in a conflict. 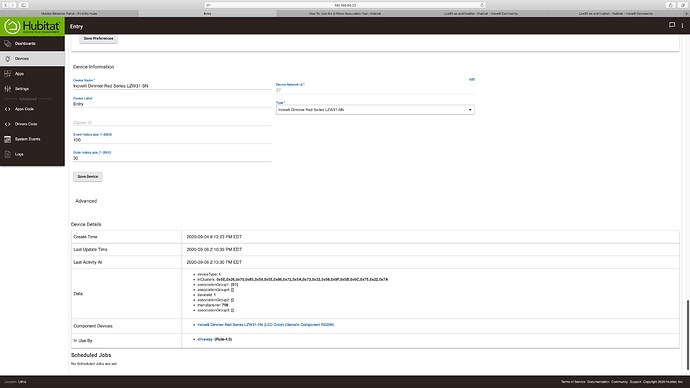 well , turned power off and rebooted hub but no luck .