LZW31 Turning on then Off Immediately

Hi, I just bought an LZW31 to use in a no-neutral configuration. I wired it up and paired it with Home Assistant (using Open Z-Wave). I changed the neutral configuration setting by hitting the config button 12x, hitting DOWN, and confirming, and it flashed cyan.

Right now the dimmer sits and the LED glows a faint blue. When I try and turn it on either via Home Assistant or the UP paddle on the switch the light ramps up to max and then immediately turns off. When it turns off the LED flashes red, then green, then blue.

Am I configuring or installing this switch incorrectly? I can’t seem to find a way to get it to work. Thanks.

@ivemlucid - I’m not familiar with HA, so not much help there; however, I just wanted to say I haven’t seen personally or seen any reports of the LED flashing red, green, then blue when turning off. I have seen those colors flash when performing a factory reset from the config button, but not like that.

Can we get some photos of the install? Is this a single or 3/4-way setup?

This is a single setup. I’ll take some pictures when I get home.

No parameter doesn’t need to be changed for a single switch with neutral. I believe if no neutral is available, then you’ll need to change the 1 parameter.

I’m not at home right now, nor do I have my paperwork with me, but I think I had to change 2 parameters when I set up my single switch with no neutral.

I have a couple of red dimmers installed on single way switches; the only difference is that I have a neutral. I made absolutely no changes to the parameters and it worked. When I installed to a 3-way, that’s when I had to selected 3-way toggle (dumb switch).

It’s a fixture with 5 LEDs, but according to the package they are 6W each so 30W total. I’ll try putting some incandescent bulbs back in later.

When it turns off the LED flashes red, then green, then blue.

Is that Sylvania Lightify bulbs? If so - then they will flash in colors when on when they got reset. It happened to me - when dimmer turns on - apparently on the very low dim value power is not enough for bulb to start so it starts and immediately turns off. Just to start again immediately after that.
And Sylvania Lightify bulb will reset if it will be turned on-off 10 times within 10 seconds.
So I needed to lower minimal dim setting to 40 so it won’t try to turn them on earlier than that and repaired the bulbs with the hub (just run device discovery).
You can also try disabling local relay to keep power always on to this bulbs.

I believe I have the exact same issue as @ivemlucid. I got the red series dimmer switch today and attempted to install in a single-pole non neutral installation. I followed Step 5 in the installation guide (for the non-neutral setup). Quick note that the end of step (5) reads that you need to continue on to step (6), but I’ve come to the conclusion that if you’re in a singe pole setup that this isn’t required.

Any thoughts on what it might be? Even thought I’m pretty confident I’m over the 25 watts threshold, could it still be the bypass? 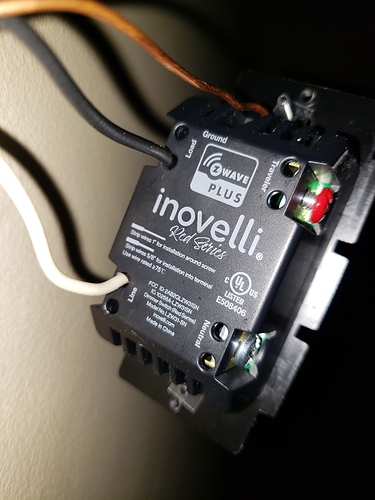 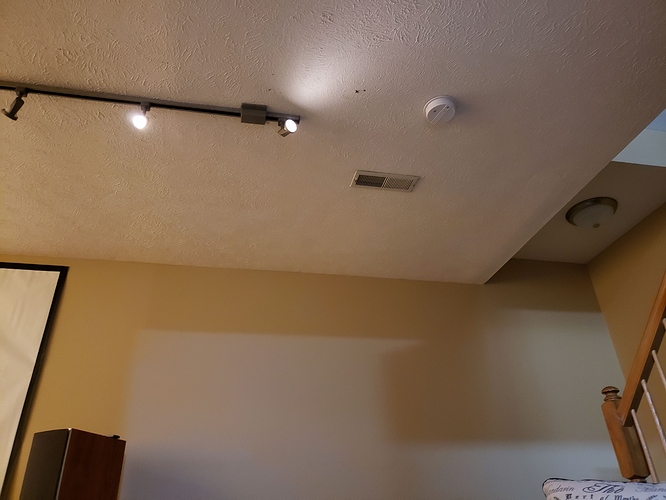 @marvinmatthew - This may be already addressed above, but are you 100% sure on the wiring? “Typically” the line is black, load is ehite… Have you tried swapping the wiring? Dumb switches won’t matter, but the smart switch will.

My problem ended up being the lighting load was too low. Even though it should have been a 30W load with all the LEDs, I swapped one of the old incandescent bulbs back in and the switch works great now.

I’ll have to plug a single LED bulb into a lamp later and measure the load it pulls. I wonder if it’s rated accurately or how flexible that 25W threshold is.

Either way, I’ll install one of those Aeotec bypass kits and hopefully that will let me use all LEDs. Thanks so much for your help, everyone.

Count me among those with the LZW31 (in a 3-way, dumb switch configuration) whose lights will automatically turn back off.

I haven’t quite figured out the pattern yet, but here are some of my observations:

I was hoping I could get by with the dumb switches for the time being as I’m holding out hope that Inovelli will release an Inovelli branded Aux switch which matches the new LZW30/31 design.

I’m tempted to use another Inovelli smart switch with associations just to get the matching look, but my gut is telling me this is a bad idea. I had a similar setup with some Intermatic switches years back and the associations would occasionally get dropped rendering one of the switches in the 3-way useless. As such, I prefer the physical interaction with a 3-way circuit.

I have 2 switches, one is flaky exactly like what was described. Turn on then off then flashed rainbow almost as if it reset itself. I decided to swap with the second switch then the behavior stopped. Now that device is just not installed because I don’t want to go through the hassle of debugging. Already spent a whole days last week debugging.

I was hoping I could get by with the dumb switches for the time being as I’m holding out hope that Inovelli will release an Inovelli branded Aux switch which matches the new LZW30/31 design.

I switched from the 3-way dumb switch to a GE Add On switch and the issues with the lights automatically turning off is resolved. As a nice bonus, the Add On switch provides full dimming control of the lights as well.

Here’s a photo showing the visual difference. From left to right: 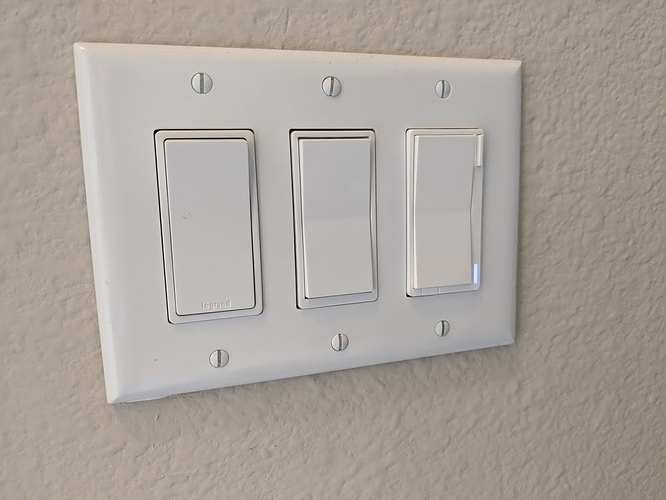 Totally random question, but how did you get white for your LED indicator color? What’s the parameter value?

@silencery I do not think “white” is an option, yet. I think it’s in a future release though.

Thx. Yes I’m aware white isn’t available as a current option. I was referring to the photo from @josh above where the indicator looks white.