Maybe I misunderstood the question. I though @texx was attempting to use a Red series dimmer to control the light portion of the LZW36. If this is the case, scenes will need to be used because the Red series dimmer cannot associate with the Light component of the LZW36 directly (it will control both the light and fan at the same time)

If the intent is to use the Light button on the LZW36 to control a Red series dimmer, then yes, association can be used (group 3 for on/off, group 4 for dimming)

You understood the OP’s goal.

Pardon me if I’m dense. The issue is I don’t understand the implications of:

That would cause both the fan and light to both be controlled?

Hopefully this screenshot of my setup will help clear things up: 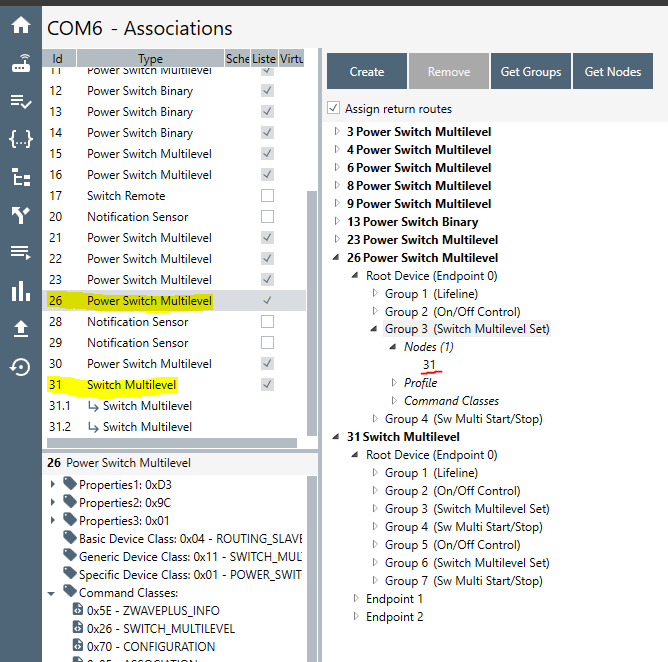 In order to control just the light endpoint of the LZW36, I have to send commands to node 31.1. If I send a command to Node 31 (without the endpoint after the decimal), it will control both the fan and light at the same time.

Since the Red Dimmer does not support multi-channel (multi-endpoint) association, it is not able to send a command to endpoint Node 31.1, and will instead send the command to root node 31 (which controls both the light and fan).

I’m using Hubitat and apparently there is some code in the Inovelli driver that allows the user to get around this problem. See Z-Wave Association In Hubitat

@EricM_Inovelli Because @jtronicus is using a different system than I am (I’m using Hubitat) and although he has been patient with me I still cannot see why a Red Dimmer cannot be Associated to a LZW36 Light ONLY. ie the goal is to have the Red Dimmer control ONLY the LZW36 light and not the fan.

Looking at the group description of the LZW36 It would appear to me this could be accomplished, however jtronicus with a different system doesn’t seem to.

BTW I don’t have an LZW36 to test my assumption. Can you help us out?

Thank you both @JohnRob and @jtronicus, you’ve both given me a bunch to think about and I think there are a few paths forward on how to procedd. Sadly, the three-way switch that I want to setup is also our bedroom switch and the WAF would plummet to the basement if I took our bedroom offline for more than a few hours.

Hopefully @EricM_Inovelli has some insight on how to setup a Red dimmer as the remote switch for the LZW36.

As mentioned the switches and dimmers do not support multi-channel associations. We can definitely look at adding it in the future. If you are using something local like Hubitat then you can use scenes. That would give you pretty responsive results.

If you have a second LZW36 (which does support multi-channel associations) you can associate the 2nd switch to the 1st switch to have real time on/off and dimming. The light up/down and fan up/down will send on/off (single press) and dimming (hold down). I need to setup a user interface for this in Hubitat and SmartThings, but it is possible.

The light & fan on/off buttons will need to be setup as scenes in your hub if you want to use them to control the 1st switch. This is because Z-wave does not have any “toggle” commands in the available command classes for those buttons. It is pretty simple to setup your hub to toggle the 1st fan + light switch though.

Here is an example of my associations in the setup I have described above: 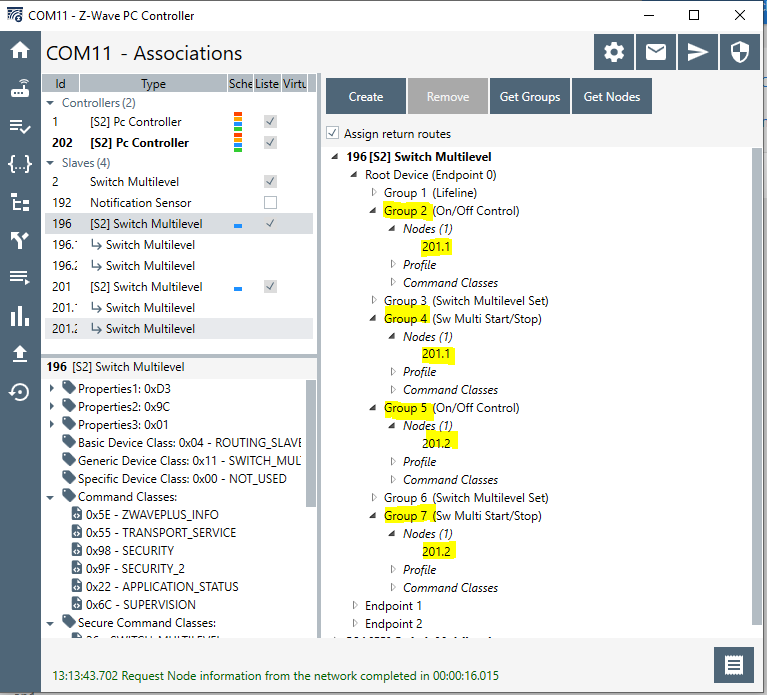 If you have a second LZW36 (which does support multi-channel associations) you can associate the 2nd switch to the 1st switch to have real time on/off and dimming.

If I were to use a second LZW36 in order to create a virtual 3-way, but I dont wire up the canopy module for the 2nd device, will that cause any problems? Will the switch continuously attempt to locate the non-existent module?

I’ve done a lot of my testing on the z-wave switches that are paired to canopy modules that are not plugged in and I haven’t had any problems yet. Everything works as expected.

Eric, Apparently I was confused regarding associations.

Specifically:
Red Dimmer to Red Dimmer Group 2 (on / off) and Group 4 (dimmer?)

This being the case then how is it different from:

Red Dimmer to LZW36 Group 2 for on/off and Group 3 for dimming. Or is it a situation the Red Dimmer must talk to all three lighting related Groups 2,3 & 4?

I’m using Hubitat so I don’t see (nor understand) your screen shot.

In case you felt our (jtronicus and I) were in a heated argument, I can assure you we were not. We were simply discussing a technical point and In this case I was the one to benefit. I learned something I didn’t know.

Getting back to your issue, I don’t recall what hub you are using.

I dont think you are looking at association groups the right way.

Associations work on one direction. If I press the “on” button on a red dimmer, it will send the command to any devices listed in group 2 on the red dimmer (the groups on the LZW36 are irrelevant at this point). The problem is that the Red Dimmer does not know how to talk to the specific endpoints on the LZW36 (the fan or the light individually), and can only speak with the device as a whole. In order to maintain some sort of backwards comparability, commands sent to the root device control both endpoints.

Thank you for the explanation (and your patience).

I see the larger picture but still struggling with some of the details. This is not surprising as I’ve never has occasion to go this far into the details. However in this case my curiosity got the better of me.

Nope, didn’t feel that it was heated.

As for what Hub, I’m using Smartthings.

I’m thinking at this point I would have to disable the relay on the Red Dimmer, and associate it. This is neat, and I’m going to have to think about how I want to do it. I can’t do my usual install and then figure out how to use it.

I’ve used a three wire AC cord (like from an old computer or sacrifice an extension cord etc) to connect a dimmer on my desk. A simple wrap in tape to keep you from touching the terminals helps.

I can test to my heart’s content without actual installation.

Yes, including support for this would be a good thing. I have a three way where I’d like to be able to control at least the light and have wired in to Red Dimmers to do so. It obviously does not work through group associations, but would be great if it would. Current setup is for a switch press to make a trip to the controller and for the controller to switch the light, not my preferred solution.

I do like the idea of using another LZW36 to control the fan and light…but don’t want to buy one with a canopy module. Any plans to sell them without a canopy so solutions like this can be supported?

For sure, it is feature we plan on adding in the next firmware release. We currently have a lot of resources pointed at other projects since we just wrapped up several changes on the switch and dimmer line, but we will circle back to them as soon as possible.

For sure, it is an issue we plan on adding in the next firmware release.

LOL, see, resources are so scarce my brain can’t even function.

Hi @EricM_Inovelli, is there now a timeline for the firmware update to support multi-channel associations for the switches and dimmers? Thanks!

Just adding a vote to program in the ability for a Red dimmer, LZW31-SN, to be associated with the light of a Red series (is there any other? :-)) fan/light, LZW36. I have a fan/light in a den with no windows and the switch is behind the door so its a bit of a pain to get to the switch to turn on the lights in that room. There is a switch in the hallway outside the door, that was wired to do doing something else that I’m not using. I’m using a Rule Machine rule in Hubitat to configure a button device to set #1 pushed to turn on the light child, and it works, but it is a bit slow. (Though I have to still find again the discussion of what param to change to speed up the fan/light turning on faster). But, I know that associations are faster and are non-hub dependent.