In another thread there was indication that @EricM_Inovelli planned to add this capability, but I haven’t seen that happen yet - I’m suspect they will get to it once the chance arrives.

Looking at the the change that added it for the LZW31, it appears it wouldn’t be too hard to add, though there is the added complexity of having two LED notification devices to control. If someone is up for giving it a try.

I have been tempted to try, but haven’t had the time.

Yes, for sure. Working on getting several changed done for the driver & device handler this week.

Any updated for the LED Child Devices. Was hoping to change the Fan LED on the basis of High/Medium/Low but need the command / Child to be added.

Have you tried using the Hampton Bay Fan Component as the child driver? I have been using that and can set it based on the regular fan template.

@EricM_Inovelli, we could really use this feature soon in order to sync the LED to the level of the smart bulbs that are controlled by the switch. There’s a nice little app that keeps them in sync but it needs the children.

I did the parent/child work. And here is your first pull request!

Alright, you convinced me.

I’ve added the child devices for the led color and intensity to the lzw36 driver.

See this is why I tell everyone you’re my favorite.

Eric is my favorite too (depends on which Eric is reading this).

My mission was accomplished with a Hubitat Rule. The color transition are not perfect as the Zwave message from local Hub is clearly not as quick as device firmware that controls the LED Bar 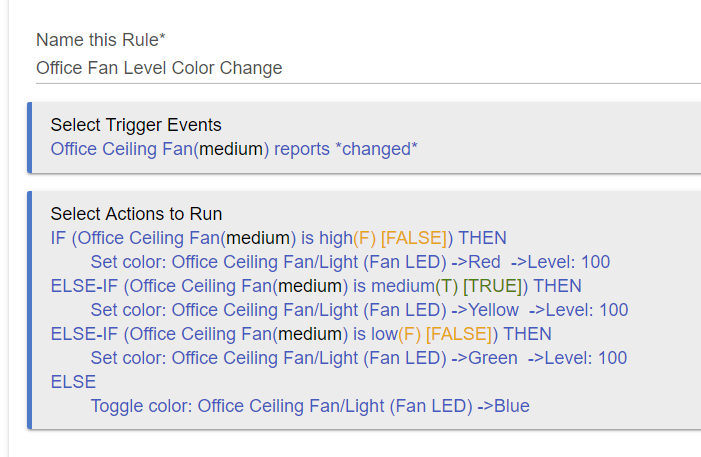 @EricM_Inovelli Thanks for the update…