LZW36 with LED Bulb - Light will not turn off

I have a Unbranded “Hugger” 52" LED fan (home depot). Has a single 9watt LED in it. When I turn off the light switch on the LZW36, the bulb never shuts off. Switch is Hubitat is reading “Off”

Do I need to install one of the Aeotec Bypasses? Wife isn’t to thrilled about having to see me all night long

If you have one, I suppose it wouldn’t hurt to try (if you can make it fit between the module and light connection — not the whole thing or fan connection, of course), but I’d be surprised since unlike the LZW31/31-SN dimmers, this one necessarily has a neutral wire and the bypass was recommended to solve a specific issue with no-neutral setups on the dimmers. That being said, I don’t know about the particular switch/dimmer used in this module, but some do trickle a bit of power through the load, even when “off”, which might cause flickering or a lit bulb for small loads like this one seems to be…I can’t remember if it was a Zooz or Inovelli switch where I saw this with a closet fluorescent fixture. So it’s not totally out of the question if my experience means anything.

I’m guessing the bulb included with the fan is a no-name bulb, and I can’t find specs on whether it’s dimmable from casual Googling. If you replace the bulb with one that you know is dimmable and preferably specifically compatible with TRIAC dimmers, you might have better luck without needing to worry about any of the above. This is all assuming you didn’t do something like switch any of the canopy wiring, where none of this would help.

You may also be interested in this new thread (and the support article it links to): Compatible Bulbs/Fans for Fan & Light Switch

Thanks - i came across that. I also thought this cheap fan’s LED was integrated and not just a screw in bulb, but i was wrong…so just going to swap out the bulb

@poelock Did swapping bulbs resolve your issue? I just installed my LZW36, and found my lights still glow when off. They are the original bulbs which came with the fan; I think no-name, but they do dim up and down; just never all the way off.

Update: Decided to drag the ladder upstairs, and try different bulbs; since this is in the bedroom, I couldn’t really wait to resolve the issue. Replacing the 40W equiv. w/60W equiv. resolved the issue. The original bulbs worked with the original wireless controller; so the Inovelli seems to have a higher leakage when off than the original Hunter module.

I see you found the answer already but yeah…swapping out the original bulbs fixed my issue.

I figured I would piggy-back on here. I have a fan with an integrated LED light module and the light will not turn off when it is set to ‘off.’ Any suggestions?

I suppose I need more specific. When the light is on, the light/dimmer turns on as expected. When I turn the light off, the switch turns off and the lights turns off, but off is now say 5% brightness? The switch signifies it is off and there is definitive difference between on and off, but off state still has the light on to a minimal percentage. From every other canopy module I’ve seen, this looks to be a design flaw. This is the first module I’ve seen where there are not dedicated wires for the line side and the load side in total. This module shares a neutral between both sides and I have not seen that in any other module I’ve wired lately. All other modules I’ve wired have separate wiring for each side.

From every other canopy module I’ve seen, this looks to be a design flaw.

I have no idea what canopies you’re referring to, but the idea of a lack of two neutrals being a design flaw doesn’t really make any sense. Ceiling fans are traditionally wired via a 3-wire Romex where two conductors switch the fan and light and the third conductor is the neutral for both. So even if there was a canopy that had two neutral connections, they would still be wired to the same neutral from the switch. Plus within the canopy, the single neutral is supplied to both the fan and the light, so it doesn’t matter if there is a single or double external lead. For two neutrals on a canopy to be separated in any meaningful way, you would have to have hots and neutrals from two different circuits i.e two different breakers run to the fan box. I have never seen a fan box wired that way.

Getting back to your problem, you could have six neutrals and you’d still have the same issue with the LED not fully turning off. It’s a function of the LED’s electronics interacting with canopy’s electronics. From your description, the switch seems to be working as designed, so I’d try a bypass to draw the voltage down.

I had the same issue when replacing the original Hunter module which failed. It had a hot in to the module, light and fan out from the module, and one neutral common to the fan, light, and control module.

The LED lights supplied with the fan were dimmable, 40W equiv, IIRC. When I installed the Inovelli switch and module, the lights were fully dimmable, but that night, once it got dark, I noticed the lights still glowing dimly. I replaced the bulbs with 60W equiv, and they now go completely off.

If I read your description correctly, it sounds like you have non-replaceable bulbs. In that case, a bypass should provide enough extra load to allow the lights to fully extinguish. This is a somewhat common issue with dimmers and low wattage LEDs; and the use of bypasses a common solution.

Here is a reference for what I referring to: https://www.amazon.com/Fan-Receiver-Hampton-Bay-fans/dp/B01BW7TO4M

There is a two-wire line side and a 3-wire load side. I wasn’t talking about additional wiring from the switch. This is how every other wireless module I’ve installed looks. This is also the type I replaced and did not have any issues with the light not turning off and dimming worked fine. I would think there’s a reason every other manufacturer has a separate neutral on the load side and not shared with the line side. That was my thought process.

I think it comes down to the components used in the dimmer. Dimmer designs are built around two predominant components. Inovelli uses one, other manufacturers use the other. One smart switch manufacturer uses both, in different models. There are advantages and disadvantages to each. With the rich feature set that the Inovelli’s advance come some drawbacks.

Let us know how the bypass works out for you.

Since this isn’t a standard switch, do I put the bypass on the light/neutral wires (u/w)?

I’m having the same issue. Light is LED and still showing about 5% brightness when off. I measured voltage in the socket after unscrewing the LED and its 120v. I am still troubleshooting but at this point it appears to be either a setting I’m not aware of or a defect. I’m hoping its just a setting. I like this switch. 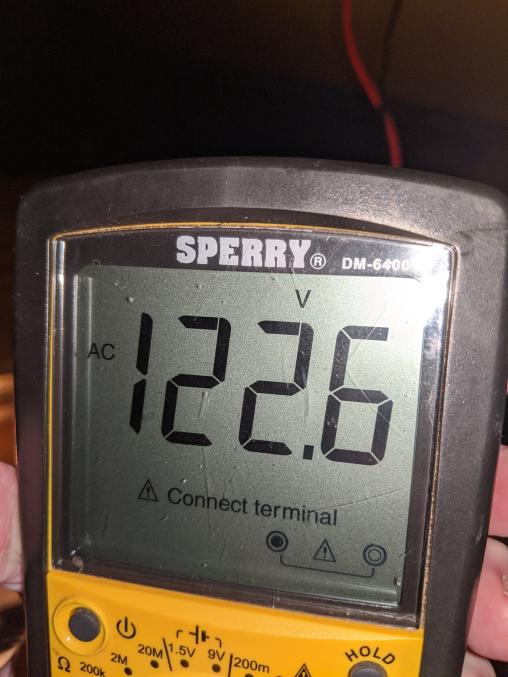 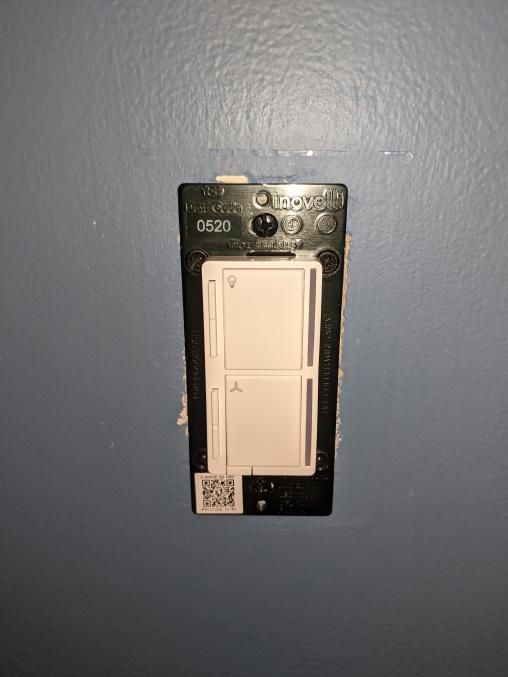 do I put the bypass on the light/neutral wires

That’s right. Between the white neutral and the lead connecting the canopy wire (blue)/lead to the light.

I’m having the same issue.

Same answer. Try a Bypass. See how @jhciotti makes out with his first, maybe.

Can’t say for sure, but that seems to be the next step.

I dont have a problem with buying a bypass if its needed but it doesn’t make any sense to me. If the switch is off, I would expect an open on that circuit, not 120v. How is a bypass going to fix that?

UPDATE: I installed another 100W LED bulb that I had laying around and it doesn’t stay on when the switch is off. These are cheap chinese bulbs I got on amazon, the one that works correctly is Feit brand. I’m still not sure why its reading 120v on my multimeter when its off but if I can get it to work then I don’t really care. I just need to find another bulb thats warm white now and not cool white.

Some LED bulbs are problematic with dimmers. That’s just the state of things right now. It’s a function of how the bulb interacts with the canopy’s components. Innovelli has a compatible bulbs list for dimmers but I’m not sure if that applies to the fan dimmer as well.

I had a bit of a weird issue happen and I’ll inform if it happens again, but after installing the bypass, the switch and fan modules stopped talking to each other until I reset the power again. After resetting the power, it seems to working fine now.

The light does turn completely off now with the bypass in place on the W/U wires.