I’m trying to replace an existing 3-way with a red series on/off switch and add-on switch, but none of the wiring diagrams match my situation.

Box 1 has a three-wire cable with a hot line wire and two travelers.

Box 2 also has a three-wire cable. Two of the wires continuity test as being tied to the two travelers from box 1 (although the colors have changed). I assume that the third wire is the load.

There is a junction box in the middle. I opened it and it was scary. I don’t want to dig into it if I don’t have to.

First question. Do you have two wiring issues or one? In another threadl, which was split to a new thread, you said that what you had matched a diagram I drew. That diagram doesn’t match what you described here, so trying to understand how many issues you have.

I created this thread. An admin tried to be helpful and created the other thread.

None of the “official” wiring diagrams from Inovelli match my situation. I think my wiring matches this diagram that you posted. 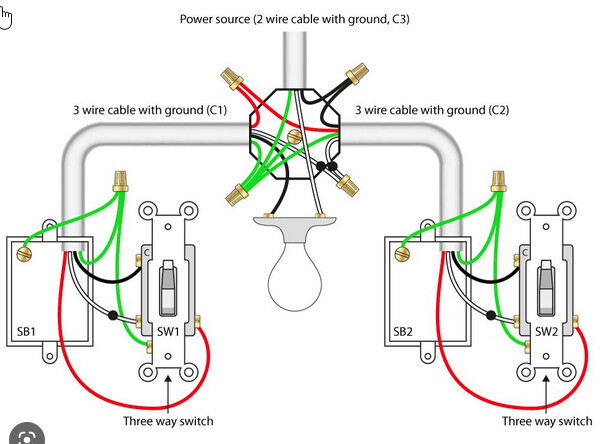 Got it. Glad you posted this again as I had posted this configuration and a non-standard one. This one is a standard power to the light in the middle so there is a solution.

This should get you started, but post back with questions.

It can be done…but it will require re-wiring; to either re-route the constant hot or even re-wiring to install two Inovelli dimmers…

One question that I have is does this require a red series dimmer?

I’ve got red on/off switches and black dimmers, but no red dimmers in my tub of switches.

does this require a red series dimmer?

Red and Black switches require a neutral, so neither of those will work.

You can use an Aux with a Black dimmer.

You can’t use two dimmers if you’re following the 2nd diagram, as there is no way to power the 2nd dimmer in a non-neutral without a load. If you can get a the light box where the two 3-wires meet, you ought to be able to re-wire it to send a hot and neutral to each box, but without re-wiring at the light, I don’t see any way to do two dimmers.

I thought that I got it configured for non-neutral with an add-on switch, but I must have missed something.

The dimmer works as expected, but the add-on is ignored.

That sounds correct wiring wise. You tested the black conductor in each box (while disconnected) to determine which one was the line, right?

The switch has to be configured for a three-way momentary. Which hub are you using?

Setting the dimmer to three-way momentary was the necessary magic. I tried setting the aux from the switch and it apparently didn’t save. I then tried setting it to 3-way Toggle in Hubitat. Neither worked.

Once I set it to 3-way momentary, the add-on switch started working properly.

Thank you for your help.