I have been eagerly awaiting the release of the Fan + Light switch and have placed my order for 5 of them today. In reviewing the documentation I realized that the wireless fan control module’s wiring does not match up with the wiring on my existing fan controllers. I have Fanimation Wrap Custom fans. The wiring diagram for this model of fan can be found on page 10 in this guide. I have also posted an image below.

Does anyone have an idea for how would the wiring out of the Red Series Fan + Light switch map to the Fanimation Wrap Custom fan? 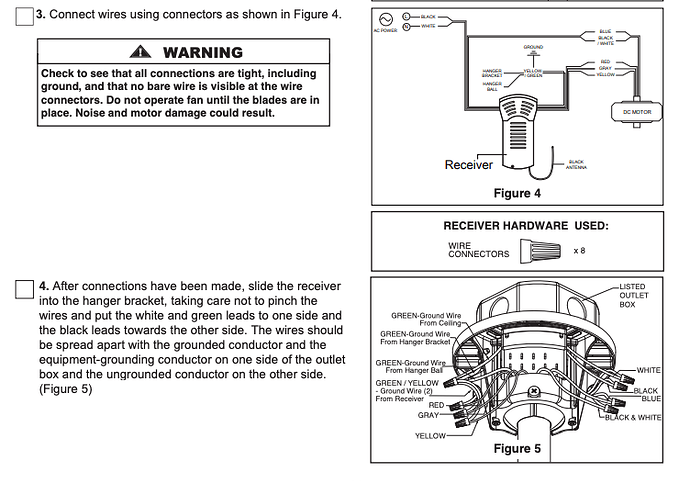 Hey @grdavies - thanks so much for reaching out and for joining the community!

So… I unfortunately have bad news… The switch is only compatible with AC motors, where it looks like the Fanimation is a DC motor.

Idk if that has anything to do with the wiring being different, but I wanted to at least call that out now.

From the spec sheet: AC/DC Motor Compatibility: Only compatible with AC Motors

NOTE: This is a work in progress and features/specs are subject to change. Please see our community thread to stay up to date: https://community.inovelli.com/t/fan-light-switch-project-hurricane-pre-orders-now-open/23 The LZW36 Inovelli Fan +...

Wish I had better news

Edit - Eric beat me to it. Bummer, ignore below.

Wow - that is a lot of wires running in there.

The black and white coming from the ceiling are pretty obvious where they go.

It looks like the wires running up from motor are the ones left to figure out.

So… breaking those down, it looks like 2 are for the light. I would guess it is the Blue and the black and white. First, take a multimeter on those pairs while powered on to see what the voltage is. If the 18W LEDs on the fan run off of 120V, then you should be able to connect the neutral to the white wire and the light load to the inovelli blue wire. If they are stepping down the voltage because the LED in the fan is custom and using the controller for the required AC -> DC circuit, then you might be out of luck there and the light part wont work.

I am guessing the Red, Gray, and Yellow run the fan motor and now I am out of my depth. It could be that one is a neutral, and the other two are for running the fan in either direction? Unfortunately, the inovelli fan switch does not have the option/wiring to reverse direction of the fan. It relies on a hardware switch on the fan to select direction. You would hook the inovelli red wire up to the load wire in the direction you want it to rotate. This is are purely guesses though.

Hope that helps a little. Not the best news but there is hope that you can get it wired up to run in one direction with the light working.

As always, I could be completely wrong on this so anyone feel free to correct me.