I have a few locations in my house where I have installed the new zigbee switches and for whatever reason I just cannot get them to pair with ZHA. There are plenty of other switches/outlets/repeaters in range however the coordinator may not be. I don’t think it’s feasible to move my NAS around during the pairing process especially when it should be able to be paired through another switch.

Any tips for extending range during the pairing process?

Maybe there’s a ZHA equivalent to this… in z2m you can specifically select the router that’s used to join the new device. Great for sleepy end devices with tiny Tx powers that can’t reach the coordinator. Also great for new routers that might be out of direct range.

Yep, you can absolutely do this! Just go to ZHA > device info page > the 3 vertical dot menu > add devices via this device.

I also had a couple switches not come up initially; i found adding them to ZHA before screwing them into the wall did the trick.

I’m new to ZigBee… I knew it’s a mesh network, but I had thought the devices managed the mesh automatically. Is “add devices via this device” only for the initial pairing, or do you have to manually figure out how your mesh should be connected and once the connections are set up, they stay that way? If the latter, does that mean if one of the devices that’s acting as a router goes down, the devices added via that device lose connectivity too?

That’s a good question and I’m not 100% certain how that piece would end up…I know that router devices (these switches) will end up as part of the mesh with connections to other routers etc. End devices (most lights, battery powered devices, etc) will typically only connect through a router or to the coordinator directly.

So if you’re joining these switches to other routers, I think you’ll be fine (should end up seeing them in the ZHA visualization too to confirm).

Edit - you can only add to router devices, so should be fine

Interesting, thanks for the heads up, I hadn’t seen that option before. I gave that a try to try to get my two switches on my network. Still no luck. I tried a couple different routing devices. I guess I’ll just keep trying.

I ended up installing the switches in an area closer to the controller and adding them to ZHA. Once they were added to the zigbee network I moved and installed them to their final location. I know with zigbee networks that it’s recommended to include it in its final location but I haven’t seen any Ill-effects yet. All the new switches seem to work fine.

I moved my hub into the room I just installed my Blue 2-1 switch in after not having it appear in both HomeAssistant pairing or SmartThings. I tested my hub by adding a new Zigbee plug to make sure the hub isn’t the issue, but the Blue 2-1 switch just never shows up. I’ve verified that the blue light is pulsing and have tried the automatic paring mode, the manual pairing mode, and nothing has worked.

I feel like the radio just may be faulty in my switch, but I’m not sure where to verify this and/or request a replacement switch. Any ideas?

[edit: I did submit a ticket for this, but am curious if anyone else has had a similar issue and found resolution without needing a replacement switch]

Have you tried pairing the switch before you put the switch back in the electrical box? Although a bit unsafe, there could be some interference inside the box

Is the inclusion range really this poor? Or is there something major I’m missing.

I haven’t tried that, but I have positioned my hub about 6’ directly in front of the switch in the same room, so I’m not sure the general signal strength would suffice for regular use after pairing if it’s not enough to pair from that distance in-wall. I’m fairly certain the radio is just DOA.

My best guess is that folks may not be aware of some of the Zigbee gotchas:

After many attempts at various combinations of auto/manual/air gapping, I was able to finally get it to appear and pair. I’m not sure exactly what I may have done differently the last time, but it the sequence was effectively reset the switch, air gap, change the mode to dimmer, air gap, and successfully attempt to pair.

Hopefully this may prove helpful to someone else maybe having similar issues.

I’ve been having issues with this all day. What do you mean be “air gap”? 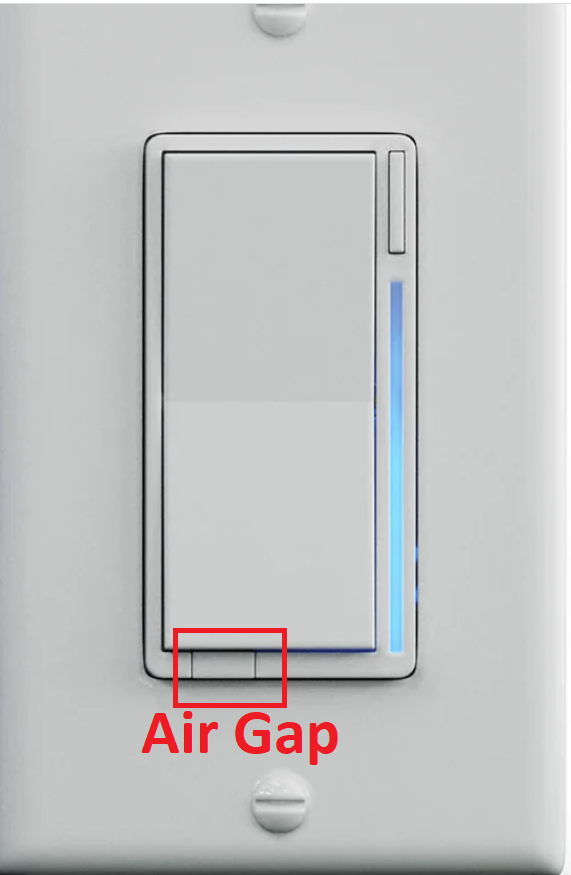 Pull out to cut power to switch. Push in to restore power.

*As always “Mind the Gap”

The air gap is a small tab at the bottom left of the switch. Pull it out to cut power to the switch. It’s an effective way of rebooting the switch; easier but the same as cycling the breaker. You may need a small screwdriver or blunt knife to pop it out. 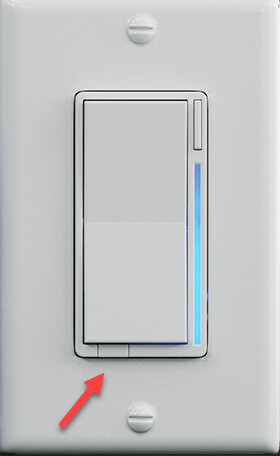 Awesome! Thanks for the quick replies…I’ll give a shot later and report back if it worked or not.

No dice. I tried the steps hoshman6000 mentioned to no avail. I’ll keep trying other things until it works.

Earlier I was able to get it paired with a lightbulb that I plugged into a standing lamp close to it (had to steal it from my wife’s office…), but the switch would report “offline” the moment I returned the bulb to its original place.