Hello, I got my 3 way working fine, now having issues with my 4-way setup. I have seen similar issues reported here with dumb switches causing the Inovelli red series LZ31N to not turn on the LED lights even though the switch has the power and solid blue led. Inovelli has random control over the LED lights when the dumb switches are turned on/off.

Can someone help me understand these wires in the attached picture?

The first black from the bottom has 120v, no voltage on the other two black (one from top, the other from bottom) when off.

There are 2 blue wires no voltage when off. Previously a lutron had all 3 black wires in a single wire nut.

How do I wire the Inovelli correctly between the two blue and three black wires? 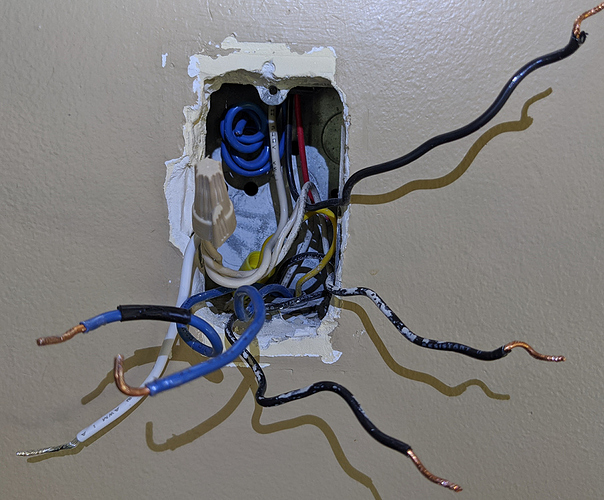 Thank you for the help.

I think we’re going to need more photos of the other switches pulled out and some drawings. I can’t tell if this is the source box or the middle box of a 4 way. If this is the middle box, you can’t use the Inovelli here. You’d have to use the dumb 4 way switch here. However, it looks like the source box and you’d bundle the 3 black wires along with another pigtail wire to connect to the Inovelli Switch. The WHT will be connected to the neutral and just a stab, I’d connect the blue with black tape to the Load connection. The other blue be connected to the traveler. However, we need some more clarification on the setup you have to get this wired properly.

Thanks I have the Inovelli connected exactly as how you described but the dumb switches seem to confuse the Inovelli (the behavior is exactly like this post LZW31-SN weird behavior with 4-way dumb switches) - I have confirmed Parameter 21, 22 at 1. This is the source box with constant power. I have Home Assistant working fine with this switch also. Any time the dumb switches are activated Inovelli is not able to turn on/off the switches although the blue led is solid at times.

Here are the two dumb switches (one with 4 blue wires, the other with 3 blue wires) 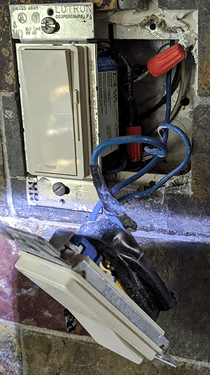 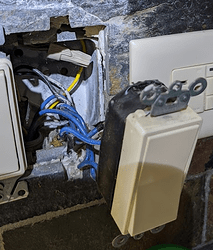 Anything I am missing here? Thank you!

Before you go too far into the wiring, you should check operation with an 40W or above incandescent bulb. It would get the possibility of a load issue put to bed.

BTW Your wiring doesn’t look like the typical home wiring.

BTW Your wiring doesn’t look like the typical home wiring

With some yellow thrown in for “good luck”?

That is what happens when you remodel your kitchen, don’t pay atttention to the contractor’s work, lose 5 years of your life doing it and it’s 10 years in the rear view - hence the question “Can someone help me understand these wires” - what is that yellow wire doing any ways?

back to my problem I have tried rewiring this 4-way way too many times now to the point that the Inovelli screws have lost their threading for sure. At the moment I have the 4-way working as a 3-way quite well with the 3-way dumb switch not working at all.

Is an add-on switch my last option to try? I am quite happpy retaining the 3-way and having Home Assistant automate the rest for me.

Honestly, the AUX switches were the smart choice for me. I hated the dumb switch feel compared to the smart switches.

Could you take some pics of the dumb switches without the tape. Looking for the black screws for commons.

Is an add-on switch my last option to try?

I’m guessing at one point this was a working 4-way (using dumb switches)? Can you get it back to that point? If you can we’ll start at the beginning and figure out what you have.

We need good pictures. That means the switches pulled out so that we can clearly see into the box as well. You’re working with blue Romex, which will make it more difficult. While the electrical tape around the contacts is a good practice, we’ll need it off for the pictures so that we can see what is attached to each terminal.

You have 3 switches? (A four way can involve more than three.) Label them A, B and C, with B being the four-way switch. I’ll probably follow up with connection questions to augment the pics.

If it helps, below is a drawing of a 4-way system. It can help put wires to each switch.

I’m not sure they have blue romex (I don’t know what that is) I think it is some sort of conduit with separate wires run in it. Look at the first photo, the white appears to be larger in diameter than the black or red.
If I’m correct, we cannot make any assumptions about the number of colors and wires in each cable.

That said, it appears the travelers to from the 3-ways are both blue with the common blue with black tape.

There are 2 blue wires no voltage when off. Previously a lutron had all 3 black wires in a single wire nut.

What type of switch was the lutron?
Do you have a multimeter? (measure ohms and VAC)

yes the Luton dimmer has been working for 10+ years. All that I did was switch the lutron dimmer with the Inovelli Red (see Switch C in diag below) identical wiring. 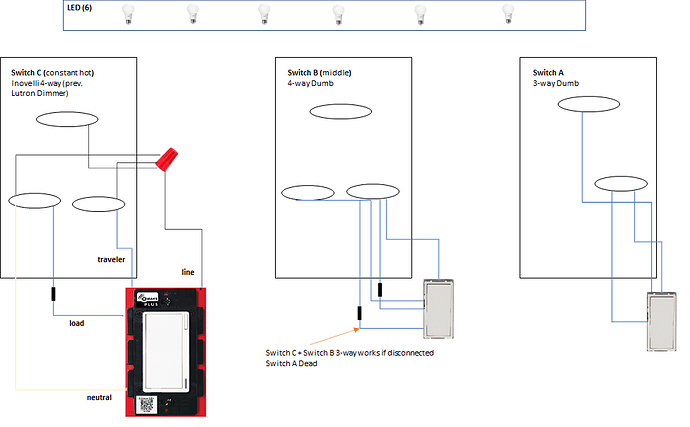 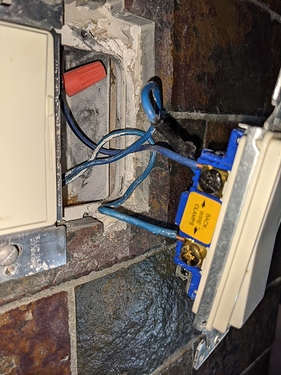 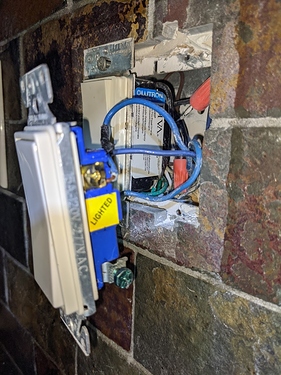 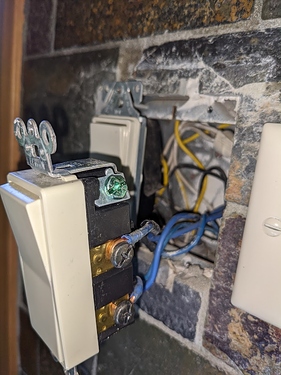 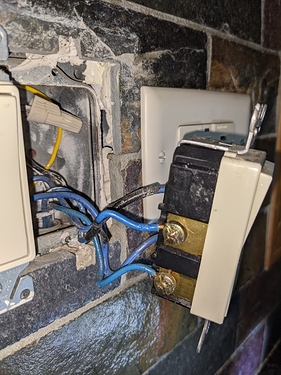 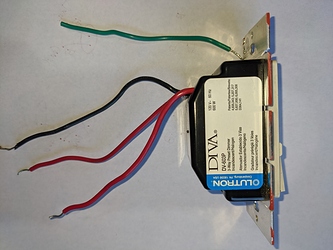 3-way works with disconnected wire on Switch B. 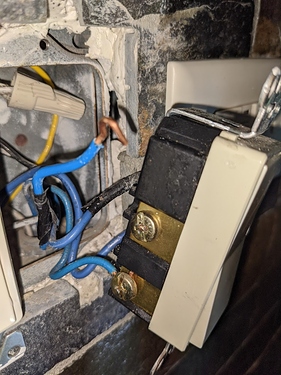 Random question, but are those dumb switches illuminated? Specifically the one that says, “Lighted” on it?

yes the light is on in the 3-way dumb Lighted switch - I see it.

Sorry, I meant, is it an illuminated switch (where the paddle lights up if the light is on)?

Similar to this one: 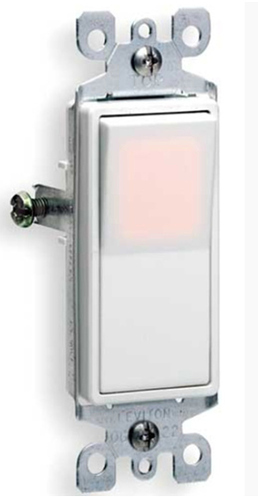 That is correct yes - 3-way dumb is on the right. 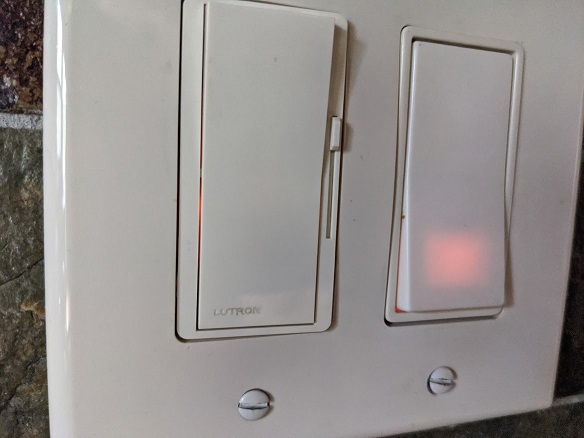 Hmmm… it’s a long-shot, but if you replace that with one that’s not illuminated, that may fix things.

very interesting - in that case I should just replace that with a add-on switch?

It’s up to you

– It’s also just a shot in the dark (no pun intended) that the illuminated switch is causing problems. I personally like the aux switches because you can dim at all points of the 4-Way, but I know it can also get expensive (they’re $20/piece – unless you’re @harjms who somehow gets them for $2).

I hear you - well I just tested another 3-way dumb switch non-illuminated and that did not fix the problem. I am quite convinced the problem is in the 3-way dumb switch. The 3-way dumb toggle causes problems for Inovelli, I can see the Blue Led going solid but no light in the cans everytime I toggle the 3-way dumb. I am able to get 3-way working between Inovelli Red and the 4-way dumb switch. I will certainly look at the add-ons and get the dumbs out of the way. Meanwhile I have Home Assistant going at it also.

Anything else I can try please let me know else thank you for all your help. Very happy with the Reds!

To help understanding your diagram, can I assume

At this point I would identify each wire, even though it’s likely just two wires reversed. Especially since switch A is non responsive. There are too many areas where the wiring makes no sense. For instance, in Switch C box, the load and traveler go to different cable/conduits?

If you have a volt meter or voltage tester we can make some measurement. If you have an ohmmeter it would be better.
Let me know if you want to give this a try.
John