Cannot get Switch to pair at all

I have not been able to get my switch to pair at all since I received it. Factory reset the switch multiple times. I even wired my switch to a power cord and held it with in 5’ of the coordinator. still won’t connect. I’m using zigbee2mqtt and a sonoff zigbee coordinator. no extension on the usb coordinator. Zigbee on channel 11,

Which sonoff coordinator? Any other Zigbee devices currently working? What Wifi channel are you using?

I would definitely recommend a usb2 extension or even a usb3 extension is fine as long as it’s plugged into a usb2 port.

I’m having the same issue, using ZHA with Conbee II.

How many existing devices are on your mesh?

In my testing this is the strongest device in my entire mesh (highest RSSI) so almost everything goes through it (if further from the coordinator, some actually go through it that are closer to the coordinator).

I agree that interference may be an issue either from the hub hardware or the wireless communication band. Get the usb dongle away from anything that could interfere.

I validate your experience and also want to communicate that I took my beta unit, on an extension cord, to the end of my driveway one floor and ~75’ away from the coordinator and it paired flawlessly. There’s no shot that these are working in a “good” environment OR there is a hardware issue in the specific switch.

Im using Zigbee2mqtt with Conbee and running into the same issue. Four total switches won’t connect. I have several zigbee devices that are connected without any issues. Can’t seem to get any of these switches to pair however

Using a USB extender cable ended up fixing this for me.

Im using a USB extender as well and no go.

Any updates on this?
I also have an USB extender, zigbee2mqtt and Conbee II.

I have around 28 devices. I just checked and I can add other sensors but none of the 8 blue switches online. One is less then 2m from the coordinator.

For both you and @huynh.kong, trying to look for similarities here. I also am using a Conbee II with extension cable but no issues with the beta hardware.

What kind of other Zigbee devices do you have on your network?
How are you running HA? Core, Supervised, HAOS?
Do the switches flash blue when they’re ready to pair and you just never see them when going to add?

For both you and @huynh.kong, trying to look for similarities here. I also am using a Conbee II with extension cable but no issues with the beta hardware.

I also started with ConbeeII w/ extension cable and z2m with no issues. I didn’t like how the Conbee reported all devices with perfect LQI 100% of the time so I moved over to the Sonoff stick.

For those having issues with the initial connection, have you tried doing the reset procedure on the switch?

I have a mix of approximately 20 aqara door senors and motion detectors. I have a few sonoff s31 smart switches that can act as a router.

When trying to pair it pulses blue and just never connects. I’ve tried resetting several times and still no go.

Any luck with this? I’m having the same problem. Using Z2M with a Conbee II on a USB extension. I have multiple other Zigbee devices (Aqara, Sengled light bulbs, Yale lock) all paired without issue. New Blue switches are about 10 feet from the Zigbee stick. After getting into pairing mode (flashing blue), no new devices show up after Permitting Join (All).

I’m running Core in Docker. I have a few aquara sensors and a few innr plugs.
The weird part for me is the first one paired. But acted weird (couldn’t reach it, didn’t expose anything, etc). I removed it and can’t see it again. However for the other 15 i have now installed, they never show up. I have a mix of with and without neutral. They all exbihit the same behaviour.
All switches start and can be made in paring mode (blue blinking) for 3 minutes but nothing shows up on Zigbee2M. I’ve tried some of the manual pairitin techniques as well, but same behavior.
I’ve reset and rebooted Zigbee2M, unplugged and repluged the coordinator. They never get seen, and nothing shows up in the logs either.
I have another coordinator (sonoff), that i can try to see.
I will also try repairing the one that once worked.

Hi I am also having similar issues. I have 10 blue switches that were installed by an electrician yesterday, all w/ neutral.

I am using ZHA with the sonoff zigbee dongle attached to a usb extender.

The switch that is in the same room as the dongle only paired when I brought the dongle within a few inches of the switch. Two more that are only a few extra feet away show up as “interview starting” but never get further than this (at this step the switch itself blinks green once and holds a solid blue).

Even the switch that DID pair has many issues. Turning on/off the light from within HA had a ~30 second delay and only one out of every 3 tries would actually do anything. Running “reconfigure” on the device says it failed everything in the “bindings” section. This behavior repeats after resetting the switches.

I have a conbee stick also that I was going to try today using a brand new setup (or maybe Z2M) and see if that makes a difference but after spending $1200 between switches and install costs I’m pretty let down. Hoping this gets solved soon.

Yeah similar issues here. I agree with @chack that we need to start looking at correlating factors to narrow down the issue.

I just spun up a brand new raspberry pi with the latest OS and installed nothing except Mosquitto (version 2.0.11) and Zigbee2MQTT (1.28.0). I’m using a Conbee II adapter on a 6ft USB extender. The Z2M UI reports the following: 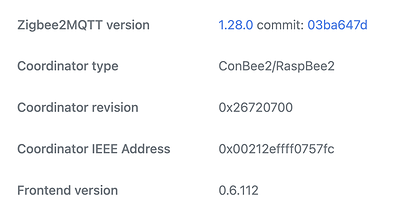 Any chance it could be the firmware on the dongle? I just checked and it looks like there is one newer version available (0x26780700). I will try updating that and follow up.

I am using the sonoff dongle but still took the advice and ran a firmware update on it. I have to say that pairing is going much more smoothly now. I was able to add 4 switches in a row. Some after that started having slow interviews but the performance is improving so far. Will continue to test today.

Just wanted to update this thread as well… the issue for me was interference with another smart hub: Unable to reset switch or start pairing - #21 by kcarbone

This makes me think that also Alexa devices might be interfering if they have zigbee capabilities.

Make sure these are unplugged or zigbee is otherwise turned OFF when trying to pair switches.

I did a few things:

I was able to get my blue switch paired with Deconz - but I understand now why the manual recommends ZHA or Z2M.

First, i had to physically turn off all Hue bulbs in my house. I also disconnected my Amazon Echo’s and my hue hub.

I’m not sure if this actually resolved it or not - but afterwards, I noticed that the Blue switch had been added to Deconz as a light.

Deconz appears to also not be passing deconz_events to Home Assistant when buttons are pressed.

Not sure how to deal with this other than switching to ZHA or Z2M, which I was planning on doing once my SkyConnect arrives.