Has anyone figured out how to control the LED bar for the Blue series 2-in-1 in Home Assistant? When The provided effect “Issue effect for all LEDs” gives an error when run.

One thing I want to point out is the Visual Editor expected efffect_type to be a string, but if you use ‘solid’ there is an error that effect type needs to be an int. I’m assuing solid==1 By looking at the color calculator tool. But, given the key error:1 in the log, maybe that isn’t right?

I’m assuing solid==1 By looking at the color calculator tool.

The switch toolbox is for LZW dimmers (Red/Black). You may have to look in the 2N1 documents for the correct effect type.

Do you have a link for that? I’m not finding anything specific for the blue/2n1

Just looked in the Hubitat driver:

So Solid is 1…not familiar with HA though.

Try this @chack turned me on to:

I’ll give that a try, but do you know what any of the values mean? Or know where I can get docs for it?

Too many unknown values for me to get that working

Whoops I had a mistake on vendor ID. 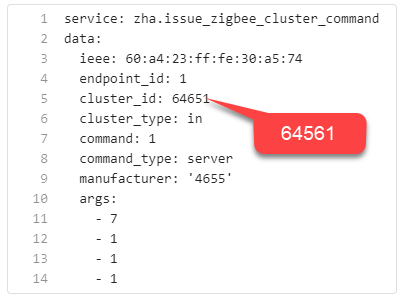 The args are the effect properties… I can try to find in the handler.

The args are the effect properties… I can try to find in the handler.

For posterity - those args are, in order:

Additionally, change the command to 3 and add an extra arg at the start for LED# for per-LED effects

Do you know what command will clear the notification?

I believe effect 255 is clear, otherwise double tapping the config button clears it as well if you prefer that approach.

The script works as intended, but it does throw a timeout exception ~10s after running. It doesn’t seem to be causing any problems though. Have you seen this behavior?

Ah yeah, like you said, it gives an error but still works. It is planned to be addressed with the manufacturer and hopefully fixed in a later firmware release.

Anyone got this working for multiple switches? I can get an individual switch to work but when having multiple switches in a script only the first one in the script will run. I’m assuming the time out error message is causing it?

@huynh.kong , I’m having the same issue. Timeout breaks the script. Is the timeout a known issue? @chack , you had mentioned it might be fixed in a later firmware update? Is there a way for us to track that?

It should be in the next firmware release, but I can’t speak to the timeline for release. I’ll just tag @EricM_Inovelli to speak to that

I did not see this in the firmware notes, but I believe it may be fixed in v2.05. Keep an eye here:

November 4, 2022 / v2.05 - This is beta firmware mostly meant to fix a few bugs that were discovered after launch. Keep in mind that there may be issues as this is beta. Please use discretion when installing it. It is currently available to Hubitat users and will be opened up to ZHA and zigbee2mqtt soon. 2.02 Add parameter 262: Disable the “double tap” to clear notifications feature. Users can make it so family members do not clear notifications at the switch. Improve the speed of sending pow…

Looks like it’s fixed. Updating a couple of switches now, and I’m no longer getting a timeout on one of the switches!