We are releasing a beta firmware for LZW31-SN users as a follow up to v1.44. It has a couple changes but is mostly meant to correct incompatibilities with smart bulbs.

We had to remove the ability to use local config mode to edit the “Invert Switch” and “Default Z-Wave Level” parameters to make room for these changes. We think this is a rarely used feature and they can still be edited through the hub.

One bonus is that we were able to add the ability to change the LED to “white” with config parameter 13 set to 255.

This firmware should be stable, but if there are any issues, please let us know.

Update: Firmware 1.45 has been replaced with 1.47 that has more bug fixes and enhancements. Info can be found here:

We are releasing a beta firmware for LZW31-SN users as a follow up to v1.45. It has a few bug fixes but notable features are: Parameter 51 to disable the 700ms delay from when you press the physical on/off buttons. This is similar to what we released on the switch a bit ago. Parameter 52. Enable this to put the dimmer into “smart bulb” mode for better compatibility with Hue and Lifx. More information can be found in the link below. I will try to update the SmartThings device hanlder and the H…

Hubitat users that are using @bcopeland’s Z-Wave Firmware Updater tool can use this link to update:

Can you guys test the new .otz & .bin to see if compatibility with Hue bulbs has improved?

One bonus is that we were able to add the ability to change the LED to “white” with config parameter 13 set to 255.

to see if compatibility with Hue bulbs has improved?

I’ve updated and, unlike last time, didn’t notice any problems immediately after the update (i.e., no immediate flickering even though the Hue bulbs were on, powered through the dimmer, for the duration of the upgrade). I’ll let you know if I see anything come up later!

@kreene1987 @BertABCD1234 Fingers crossed! This is actually a tough one to overcome because there is a balance between making the dimmer work well with smart bulbs and detecting proper dumb switch toggling.

First pass at setting as white through Alexa changed it to red??? Will test Webcore next. It’s shocking that ST can’t get me color control for these switches and Alexa can lol.

White works on Hubitat (after adding white to driver) 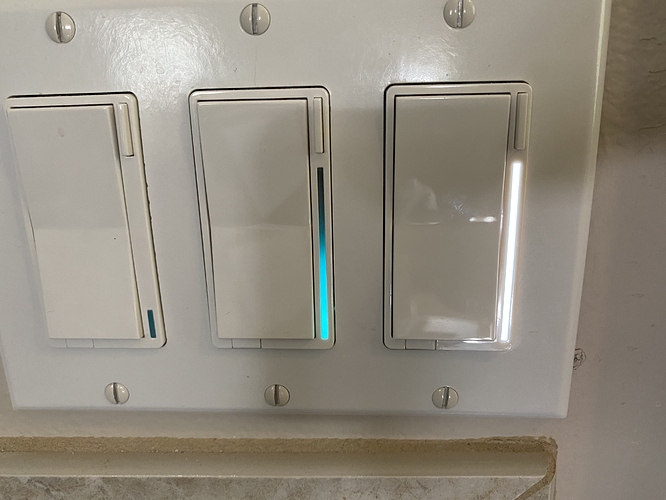 This is great news. Been waiting on white since the beginning! Thanks for this update!!
Will be trying this out immediately.

Hrm, still nothing on ST. It always changes to red…

We were using hubitat. I’ll check it again.

Confirmed latest DTH installed too… This is actually a bigger deal than I thought. Told my wife and she is like DO IT TO ALL OF THEM! Bummed it’s not working.

Works fine here. Believe me if I can do it, everyone else should too.

I couldn’t do it…

working great on two dimmers so far, I’m on openhab, so all firmware updates for me are done through PC Controller.

I did notice sometimes OTA firmware updates don’t “take” for some reason. If the indicator is lit in red, you might want to try again, especially the *.bin file.

FYI, there are updated device handlers and drivers in our github (for the white LED). Also, the white LED requires the bin file to be flashed as well as the otz.

That said, Alexa still sees the switch as Red and when I change the color to white it still goes to Red from within the Alexa app.

Edit: I would also prefer if the changelog at the top indicated what/when changes were made to the driver. I updated it after scrolling through the changes, but still see only the 05-05 change to add setColor function at the top.