These 2 are literally next to each other in the same gang box. The 1 to 3 association that I had tried previously with the same result were all within 15 ft of each other. I had used “pairing” erroneously in my prior post. I meant Z-wave association.

I’m not sure then. I haven’t seen that before. Do your actualAssociationX state variables match the nodes that they should be controlling?

@EricM_Inovelli,
Does the switch need to have local control disabled? I tried both ways and with it enabled, the lights (3 illumin RGBW bulbs), just turn on and off. If I disable local control, nothing seems to happen. Seems simple enough “on paper”

For that to work you do need to associate the switch to the bulbs. Instructions can be found here:

Yes sir, the actualAssociation for Groups 2 and 4 are populated with the proper node ID’s.

@EricM_Inovelli, this makes sense now. However, since it is a scene controller, should the association be with group 2 or 4? Also, I cannot figure out how to select more than one.
At least one part is starting to show signs of life!

Next I need to associate the motion detector to the switch I presume, or is there a better way - I am understanding RuleMachine may be a better alternative?

Many way’s to skin a cat, just looking for the most efficient!
Thanks,
Charlie-

Please see attached. I have successfully set the associations between the LZW30-SN and the Illumin RGBW bulbs, but the button presses are not doing anything.

I have been reading all I can find and an not having any luck getting this to work. Button presses don’t really seem to be doing anything.

I do see the switch acknowledging the button presses (also attached).

What am I missing? Thanks in advance!
Charlie- 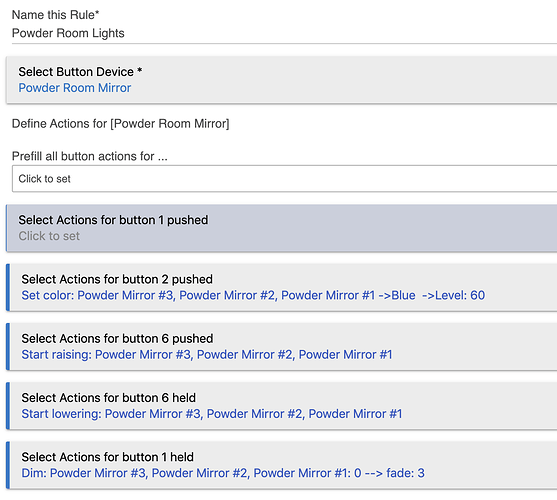 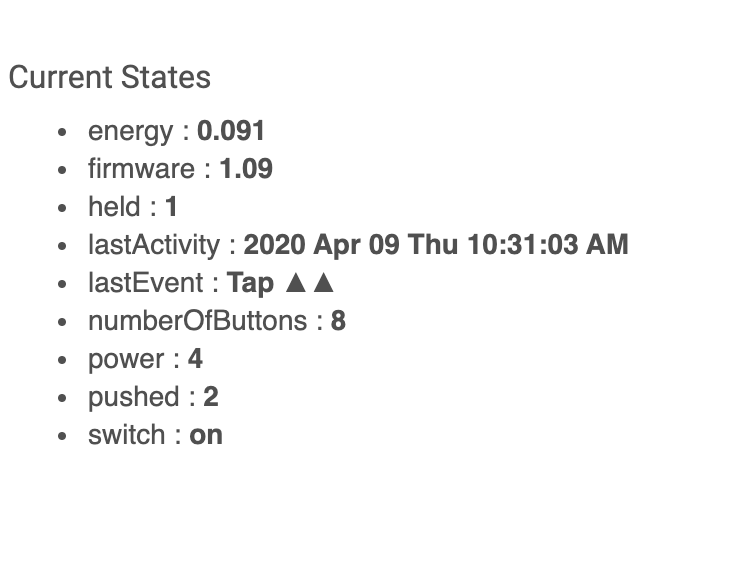 That looks correct, do you have anything in the logs when you are trying to perform these actions?

As far as your button 6, You should probably set those to “Stop changing” the lights. Set button 8 to start raising and start lowering.

Button 8 is when the button is being held. Button 6 is when the button is released. I know it is confusing, but that was kind of the consequence of platforms not natively supporting things like double press, triple press, etc. It would be nice if SmartThings and Hubitat would support 3x, 4x, 5x presses in their capability options.

Can a scene be setup in RuleMachine with a LZW30-SN switch, associated to RGBW Illumin bulbs to only come on at say 50% with one press and 100% with 2? Figured I would ask before wiring it all up. Not sure if a dimmer is required or not if the switch and bulbs are associated.
Thanks,
Charlie-

Why am I not getting 8 buttons? I have the red series switch. Are the 8 buttons for the dimmer only? 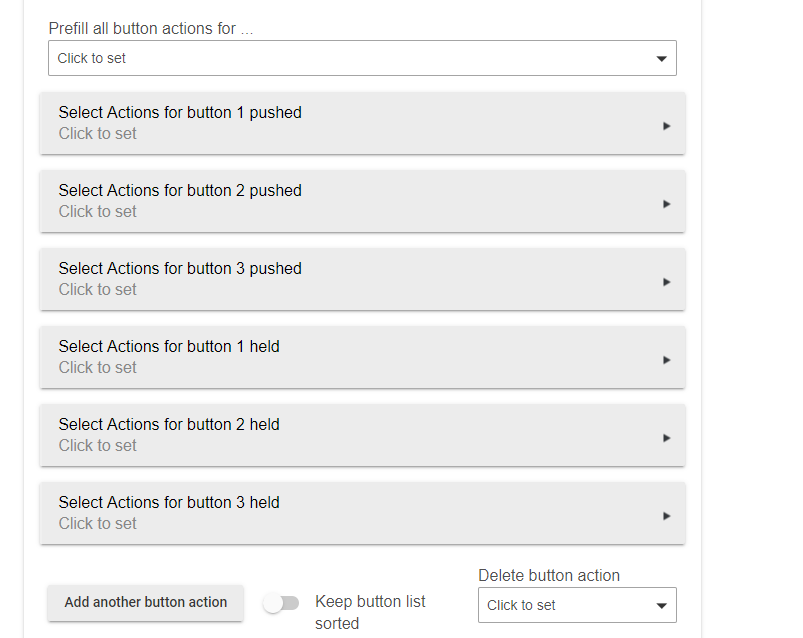 My guess is that you’re using Hubitat’s built-in driver for the LZW30-SN (“Inovelli Z-Wave Smart Scene Switch S2”). This will work for most things–you’ll get up to double-tap in each paddle direction (button 1 is up and button 2 is down), plus hold and release. Button 3 (only “pushed” works, but Hubitat’s button model doesn’t let this be clearer) is the config button.

To get all taps, you’ll need a custom driver like Inovelli’s own for the LZW30-SN. The above guide was written with that button/event mapping in mind.

After you switch to our driver, click on “Save Preferences” so that the event is sent that tells Rule Machine how many buttons there are.

I already copy pasted the raw driver over. Is there another Innovelli type i should be choosing on device info or am I missing a step after i copy paste the drivers? Is there an app that activates the driver? 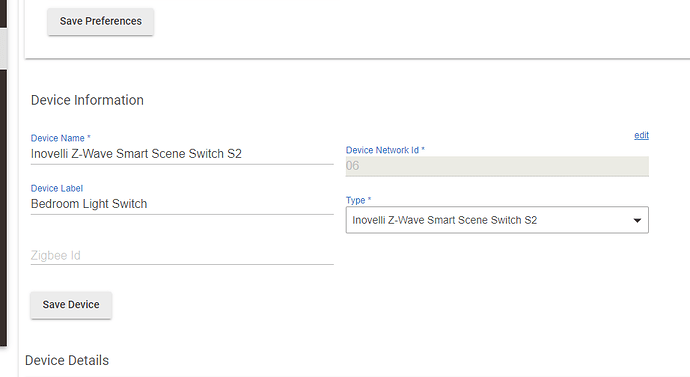 This worked! It was all the way at the bottom of the type list. Sorry if i missed that in the instructions, thanks!

Hope this is the right place to post. Just finished initial setup of 3 dimmer switches (gen 2 red), have started playing around with them but having issues figuring out exactly how to replicate functionality of a regular dimmer switch within Hubitat. My setup as follows:

Tried to do using the steps in OG post but I can’t figure out how I would accomplish the four conditions, especially since apparently the driver doesn’t distinguish between a button held vs pushed…

I actually couldn’t even get the dimmer part working at all, below is what I did and the error I get:

Again any assist here would be great!

Thanks in Advance,
Felipe

What driver are you using for the Inovelli dimmer? If it’s Inovelli’s, make sure you’re using the latest version, or at least one that’s been updated since shortly after its release: Hubitat/inovelli-dimmer-red-series-lzw31-sn.groovy at master · InovelliUSA/Hubitat · GitHub. The reason is that some of the button events mentioned above (releases, at least) were not in the original version, but they are now.

Second, what driver and integration app are you using for the Hue bulbs? This matters because it looks like you’re using a group (zone), and the actions you’ve selected in Rule Machine — “Start raising…” and “Start lowering…” — require the “Start Level Change” commands to be implemented in the driver for that device. Hubitat’s native integration does not support this on groups (rooms or zones), only individual lights/bulbs. You have a few options to “fix” this:

Finally, the button events Inovelli chose to use in their driver on Hubitat are a bit odd. (I get why they did this: SmartThings doesn’t support “released” events, which Hubitat does, and the driver is largely a port of the similar code from SmartThings; and neither platform has a good way to handle multi-tap devices without assigning additional button numbers to the same “real” button in some fashion.) If you’re using Inovelli’s driver, I’d look again at the first post here that explains what real-world actions produce which button events on the Hubitat side:

Thanks Bert! You’re right, I completely missed buttons 6, 7, and 8 (and feel kind of silly for missing it at this point…), should be simple enough then.

Also thanks for pointing out that groups don’t support that command with the native integration - I’m well aware of your CoCoHue integration (It seems awesome!) and actually have it installed, I’ve been meaning to convert over for other reasons (Pre-staging and importing Hue Scenes) and this gives me all the more reason to.

I have a few LZW30-SN devices setup and have Scene control working. However, on one of my switches the “Button 6 pushed” event doesn’t seem to be working correctly. I don’t get any UI elements when trying to edit the Triggers and Actions for that specific event. I’ve added button 6 pushed to other switches and it works as expected. Just hoping there’s an easy fix so I don’t have to recreate all of my other automations for this switch.