On my LZW31 switch (official firmware 1.35) when I use the awesome ‘invert switch’ function, I noticed that the Light Bar doesn’t actually invert when I dim the light. It looks like this: 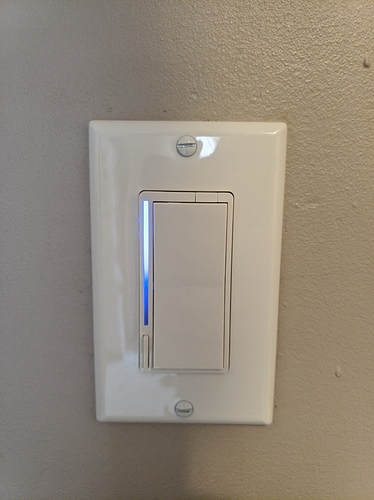 Since you guys are already working on the next firmware to remove the unneeded 700ms delay, can you maybe implement a fix for this?

Out of curiosity, what is the motivation for installing the switch upside down?

what is the motivation for installing the switch upside down?

My first thought (although I could be wrong), would be to prevent accidental presses of the config button. I am more likely to fumble around for the button in the dark, but I can see the switch when the light is on.

I have the switch on the right side of you as you walk into the kitchen. I found the little config button was getting in the way of my hand as I put it on the top of the switch without looking as I walk into the room.
Inverting it was perfect, putting the button I basically never use from a prominent in-the-way spot in the top right, to a tucked away spot in the bottom left.

To give some details on why this is more than mildly annoying… I don’t know anyone who walks into a room, stops, turns on the light, and the resumes walking into the room. Most people when in their own home will walk into the room and turn on the light as they’re walking in, no break in stride. So, when accidentally pressing the config button, it’s generally a break from what the person was doing to stop, turn around, press the up button, give it a sec to see if the light comes on, and then turn around and resume life.

I’m now working through why my Hubitat isn’t inverting the switch even though the setting says that it should be inverted. If it goes like most things zwave have gone, it will be a ton of research that leads to some very nuanced reason why it’s not working.

There’s a lot of discussion of the issue with the config button the switches sticking out too much for some people’s taste. @P53 created a printable 3D model of a lower profile button. Lots of details in this thread. Config button interfering with paddle operation - #74 by kareem613. I just broke this out into it’s own thread so it’s easier to find. For those that don’t have a 3D printer or don’t want to modify their existing buttons, here’s an alternative option based on @P53’s model. It’s …

#2: Invert switch should work simply as a config parameter change. Nothing out of the ordinary. Up will be down, down will be up. Works perfectly in my testing on my red dimmers on current firmware.

Up will be down, down will be up. Works perfectly in my testing on my red dimmers on current firmware.

Really? What firmware version? My Red dimmers are running v1.61 and enabling the “Invert” setting flips the buttons fine, but the LED Indicator is not inverted when displaying dimming level.

I was speaking to the buttons/commands. Not the LED bar.

That did cross my mind. I’m finding thatI like the button being on the bottom though.