LZW31 not working after firmware update, including the physically using the switch

After updating the LZW31 switch with the latest firmware, my switch appears to be malfunctioning.
Smartthings shows it as online, but the switch is no longer working. Physically pressing the buttons on the switch do not turn my lights on or off. The LED indicator does not light up.
This is not in a 3-way configuration.

The IDE shows the device communicating ‘moments ago’
PC Controller is hit or miss. sometimes I’m able to GET info when on the OTA update window, sometimes it errors out with ‘OTA Firmware Update initialization failed’

Any help would be appreciated

Have you tried pulling the air gap, then waiting for a few seconds (or more) and putting it back in? Or just power cycling it from the breaker if you aren’t confident in the air gap. The idea is to “reboot” the dimmer.

Thank for the quick response.
Yes i have tried rebooting the device.
I had the breaker off for at least 2 minutes

Double check to ensure you flashed the proper firmware. There is separate firmware for the LZW31 and LZW31-SN. It’s worth quickly checking.

As the firmware was updating, did you watch the packet count as it was updating to ensure it completed? There have been reports of updating via the secondary controller method hanging.

When you flashed the .bin in particular did you see the packet count scroll? I find that it can take more than one try to flash the .bin. Sometimes it looks as if it runs but no packet count displays. Trying it a 2nd time typically gets it.

Try a factory reset of the dimmer. Long press the config until it turns red.

If you have to reflash, you might consider flashing with the PC Controller in a standalone mode. Exclude the dimmer from ST and add it to the controller directly.

Back of the device also says dimmer switch model no lzw31
I did see the packet count go all the way to the end, watched it on both the otz and bin

I have tried the factory reset, but not really sure if it happened since the LED light doesn’t work, but i will try it again.

I tried a removal and setting up as stand alone, but now i see multiple instances of the PC Controller

Reset the z-wave stick in PC Controller via “reset” button

Yep, when I decided to do away with the secondary controller method, I used the reset button.

Only issue is ST will then have an “offline” ghost device perpetually until you delete it.

Thanks everyone so far.
I’ve managed to get the PC Controller into standalone mode 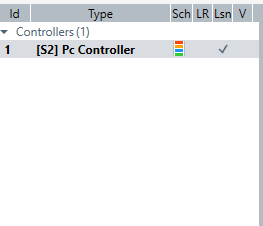 However, it seems I can’t get the switch to pair with it.
I’ve clicked Add on PC Controller, and then rapidly pressing the config button, but the add process times out.

I’ve tried the factory reset, but with no LED I can’t tell what’s happening with the device and whether its actually reset or not.

That did it!
Started the update process however it wont upload 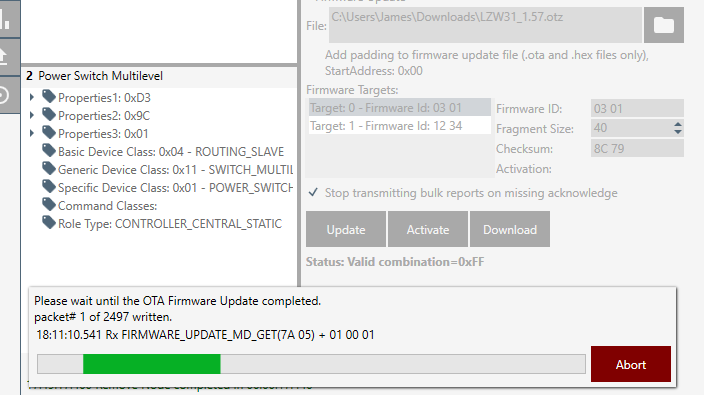 Did you happen to simply try to upload the firmware again before doing all the resets and unpairing?

First thing i tried before starting this thread

Since trying the FW upgrade with the unable to receive error - i now cant poll for FW version. 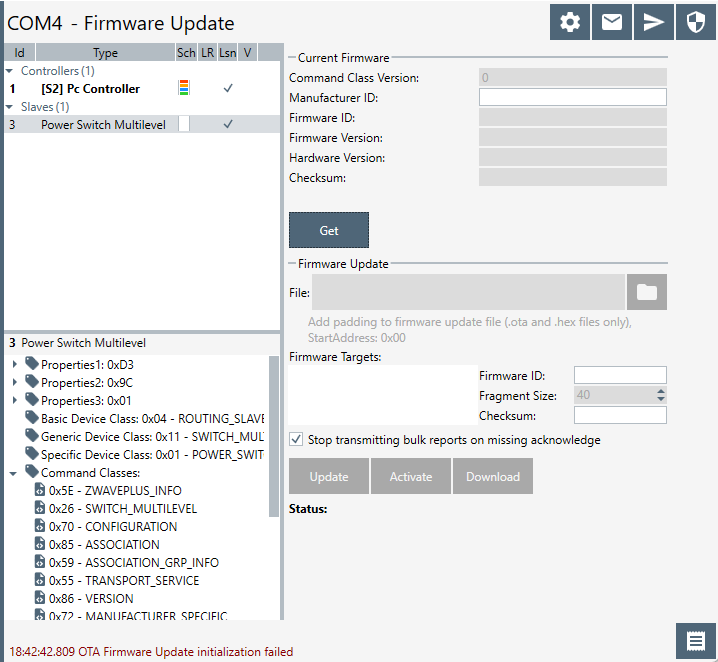 Try removing, resetting the the PC Controller, long press on config (like 45 seconds if you can’t see the LED), then re-add.

How close is the computer to the switch?

Is the back of the switch accessible? Can you take a pic?

I’d also hash the bin and otz and compare the MD5 to the posted value to insure you’re working with a good download.

This is exactly what I experienced with my Red Series dimmers - including the FW polling issue you’re having.

Curious if this approach would work for you. Basically, exclude it and readd it using S0 security. I don’t know why it worked, but it did.

@Eric_Inovelli @eric.dalquist (Sorry I forget which Eric is which so I tagged you both!) Unable to update firmware on LZW30-SN or LZW31-SN devices Current various firmware versions from 1.36 to 1.57 on the 31’s and 1.20 I think on the 30’s. Following directions outlined here Using latest version of ZWave PC Controller from SimplicityStudio, Aeotec Z-Stick Gen5+ UNABLE TO UPDATE FIRMWARE - ERROR - unable to receive=0x01 After many hours of fruitless attempts I finally stumbled across a worka…

Basically, exclude it and readd it using S0 security.

Good reminder. When you first add the switch and get the “Preparing Inclusion” dialog, you want to select “Cancel”. If you are already doing that, then perhaps the S0 version may work. 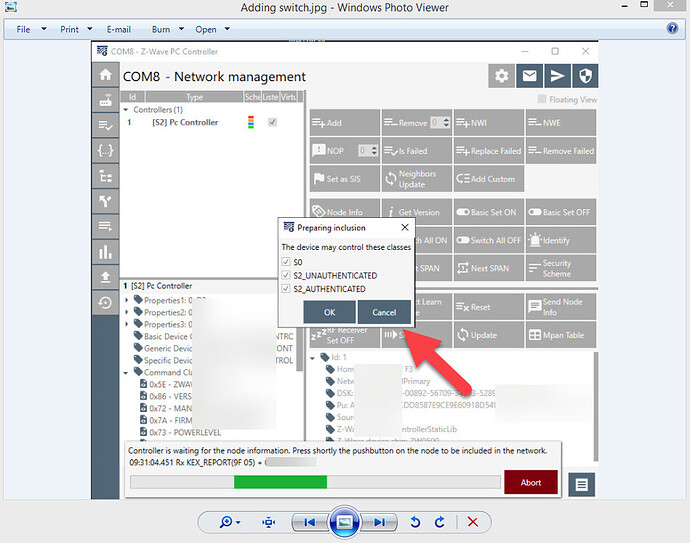 I tried resetting the controller, held the config button for a minute, then re-added it.
It’s very difficult to get a good angle, but here is the back of the switch:

I re-added using the S0 only method as mentioned by jazzisj
The upload is going very slowly, but is moving.

I’ll update the group once it finishes uploading, I let it reboot, and finish with the bin upload.

Thx for the pic. Just confirming . . definitely a black series. 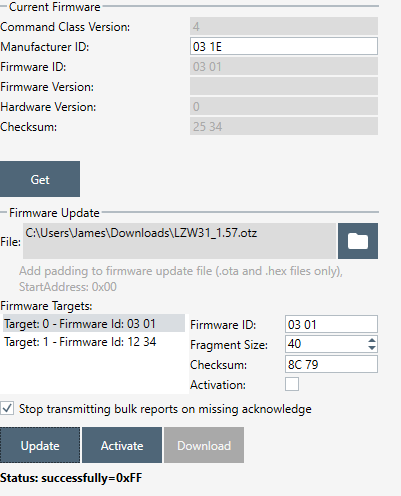 When trying bin, it would send a command to the switch, but no transfer of packets.
I tried a GET and saw the error message below