Transition not working with Inovelli Blue and Zigbee2MQTT/Home Assistant

I’ve got a few Inovelli Blue’s setup in Zigbee2MQTT, and for the ones setup in “dimmer mode”, I’m running into an issue where the ‘transition’ isn’t accepted.

In Home Assistant’s “Developer Tools”, I can reproduce this by running the following in YAML Mode:

When I do so, the following is outputted in Zigbee2mqtt’s logs:

When run directly in “Developer Tools”, it will run and set the light to the target brightness but without the transition. Also, when run in an automation, it will do the same, but will prevent the automation from continuing on and doing the rest of its stuff. (I haven’t tested continue_on_error: true for the automation, but that wouldn’t correct the transition not running)

I’m thinking this may be a similar issue to this one from October for LED effects where something wasn’t exposed via mqtt. That problem seemed to be fixed in this pull request.

I’d love some help fixing this issue. As more people get their Blues setup I can see this problem happening for more and more people, especially once the manufacturing error replacements come in December (I’ve got 30 I’m waiting on

I have updated this stating that the switch was actually running firmware v2.07 instead of v2.08. It’s possible that v2.08 fixes this but I can’t test it.

I realize that Zigbee2mqtt things this is the latest firmware (even though my other switches show either updated to v2.08 or that an update from v2.07 is available). I wonder if there is a different issue where the update isn’t recognized? Maybe the switch got into a bad state during a firmware upgrade?

Should I create a separate topic around the possibility of a stuck firmware version?

Somewhere around here there is a fix posted for z2m detecting the wrong software version. It’s fixed and coming in the next z2m release. Unfortunately I can’t find it ATM.

The new Zigbee2mqtt (1.28.4) update seems to break OTA updates entirely for the VZM31-SN 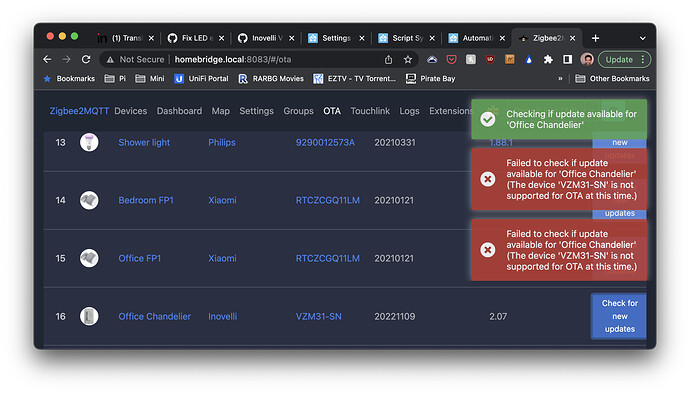 Somewhere around here there is a fix posted for z2m detecting the wrong software version. It’s fixed and coming in the next z2m release. Unfortunately I can’t find it ATM.

Maybe it’s already updated? There is a z2m bug where it may not show the correct firmware version on the ota page. Here is a workaround:

The new Zigbee2mqtt (1.28.4) update seems to break OTA updates entirely for the VZM31-SN

Do you know I can make a change in nginx to serve the file a different way as a workaround?